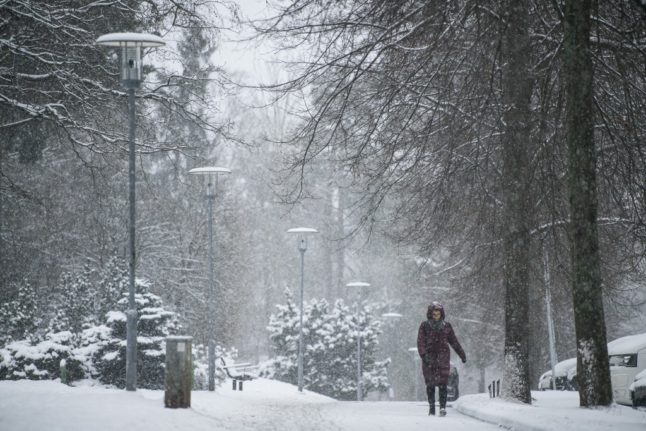 A snowy Sundbyberg, near Stockholm in January 2021. Jonathan NACKSTRAND / AFP

The roundabout where someone took the opportunity to build the huge creation, is located at the exit from highway 40 towards Dalsjöfors and Äspered.

According to motorist Perra Larsson, it has become something of a tradition for such a snow sculpture to appear at the roundabout.

“This is the fifth year it has been there. And I think it's a fun thing,” Perra Larsson told the newspaper Borås Tidning.

Helena Alçenius, the CEO of Borås TME, a municipal company which markets Borås laughed when she saw pictures of the creation.

“I am a little impressed, because it is not something that you build in the blink of an eye and it must be site-built. It looks well made, I hope they had fun when they did it”, she told Göteborgs-Posten.

But as it stands in the middle of a roundabout, the snow penis poses a safety risk, according to the Swedish Transport Administration.

“There must be no signs or artistic expressions that disturb the traffic environment and safety. If we find so during inspections, we remove it. It often ends up in a warehouse with one of our subcontractors” Sofia Lindahl, press communicator at the Swedish Transport Administration told Göteborgs-Posten.

“Even things that are made of natural materials can have a detrimental effect on road safety.

“Our contact centre has received calls that there is something in the roundabout that may affect traffic safety. Now it is up to the contractor to possibly fix this, but the forces of the weather may also have done their part during the day”, Sofia Lindahl added.

So it seems the three-metre high snow penis will not be something standing tall for long.