The Swedish coronavirus vaccination programme is behind schedule due to late deliveries, regional administrators warn.

More than 300,000 people in Sweden have received the first dose of the coronavirus so far, 3.76 percent of the population, including three out of four residents in care homes for the elderly.

But it looks like it is going to take longer than expected before Phase 2 of vaccinations – which includes all adults aged over 65 – can get properly under way.

According to SKR, the umbrella organisation for Sweden's regions and municipalities, the pharmaceutical companies have not yet delivered as many doses as they are supposed to.

“The regions' structures are built to handle a much higher pace. They are just waiting for the vaccine,” SKR healthcare chief Emma Spak told the TT news agency. “Many had thought that the Phase 2 vaccinations would be able to start and that Phase 1 would be over by now. But they won't finish Phase 1 until the end of February.”

There are further stumbling blocks ahead. Sweden has ordered vaccine from several companies, but Moderna will not deliver its doses that were to arrive this week for another two weeks, and by then only half as much as expected, said the Public Health Agency. The doses will get to Sweden eventually, but later than expected.

Moderna is currently working to increase production capacity at its factory in Switzerland, which will eventually mean that they can deliver more doses faster, Sweden's vaccine coordinator Richard Bergström told DN.

But in for example the Kronoberg region, the delay means that vaccinations of over-80s will have to be postponed, reports local newspaper Smålandsposten.

In Skåne, regional director Alf Jönsson told a press conference that they were ready to crank up the speed on vaccinations in southern Sweden. “We have the material, staff and very high capacity. But where's the vaccine?” 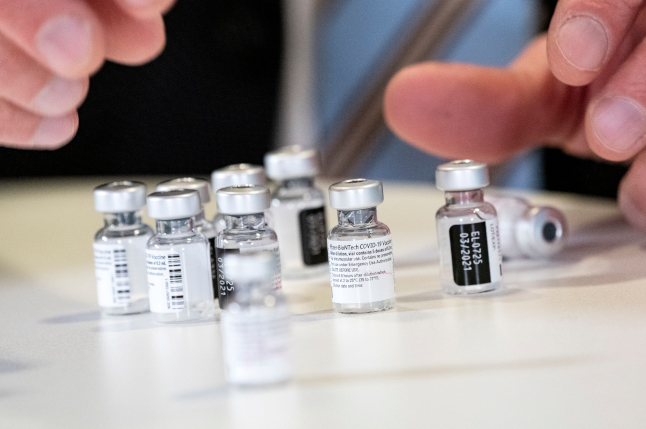 The Public Health Agency's data shows that almost 385,000 doses of vaccine have so far been used, around 74 percent of the 520,000 vaccine doses that have been delivered.

Spak said the unused doses weren't piling up, but “are in the logistics chain with an expected delay of a few days. The vaccine first arrives at a hub in Sweden. It is then repackaged and sent out to the regions. Pfizer's vaccine goes directly to the regions”.

Once the doses arrive in one of Sweden's 21 regions, they are again repackaged and sent to the organisations that are in charge of vaccinations, local surgeries and care homes.

Sweden has previously said that it wants to offer the vaccine to everyone over the age of 18 in the first half of 2021, but that this depends on external factors such as deliveries.

Phase 2: This phase will include all adults aged over 65, starting with the oldest. The AstraZeneca vaccine is currently only recommended in Sweden for people younger than 65.