The debate about Sweden's coronavirus strategy has become increasingly heated in the past year. Photo: Martina Holmberg/TT
The Local
[email protected]
@thelocalsweden


An online campaign group for fierce critics of Sweden's coronavirus strategy has been accused of being "a threat to democracy" and trying to influence foreign governments to tighten travel restrictions for Swedes. Here's what you need to know.

Swedish public broadcaster Sveriges Radio reported on a social media group made up of people critical of Sweden's coronavirus strategy, accusing them of “trying to influence Swedish interests overseas”.

The group in question, Media Watchdogs of Sweden, describes its aim on its Twitter account as “exposing the failed Swedish COVID-19 strategy and advocating for the prosecution of the architects of the strategy in international courts”.

Sweden's Public Health Agency has criticised the group following the report, with the agency's head of press describing the report as “unpleasant and shocking”.

Sveriges Radio said that the Facebook group's moderator posted about attempts to “influence governments in Europe to have quarantine rules for Swedes traveling abroad and to keep the borders closed to Sweden” by contacting embassies and authorities across Europe.

The group is not alone in all of its criticism of the Swedish strategy. Sweden's king, prime minister, state epidemiologist, and an independent commission set up to investigate the response have all said that the country “failed” to protect the vulnerable elderly, a key pillar of the strategy from March last year.

Multiple researchers have been critical of the strategy from an early stage, and in particular the reliance on recommendations rather than the kind of legally-binding rules that were being imposed in other countries. Sweden did not recommend masks to be worn by the general public until January 2021, and shops, hairdressers, gyms and schools for under-16s have never been closed at a national level.

Following Sveriges Radio's report the Public Health Agency's press spokesman implied that the campaign group's contact with foreign media was linked to “mistakes and half-truths” about the Swedish strategy in international media, but no specific examples of disinformation were given.

But one of the group's founders defended the tone, telling the Expressen newspaper: “I come from Ireland and there we are much more direct […] In Sweden, it seems to be a method for disarming someone in a debate, to portray them as problematic and against Swedish values.”

There has also been criticism of the Sveriges Radio report from other journalists and scientists.

Anders Vahlne, a professor in virology and member of the separate group Science Forum Covid-19, told Dagens Media that there was limited room for critical opinions in Swedish media.

“It seems to be a classic crisis behaviour that everyone joins behind the government and authorities. But I am still surprised that the media have so passively followed what the authorities said. At the same time, the political opposition has for a long time followed the government,” he said.

A group of around 20 scientific researchers (including some who are members of the Facebook group) have published opinion pieces in Dagens Nyheter criticising the country's strategy, and some have argued there has been insufficient questioning of the Public Health Agency by the media.

Beyond only criticising of the Swedish strategy, the Sveriges Radio article accuses the Facebook group of trying to influence foreign countries' policies towards Sweden.

The LinkedIn page of the founder states that in his role in the group, he “successfully lobbied Members of the European Parliament” as well as securing press coverage for members of the group. The founder of Media Watchdogs of Sweden, Keith Begg, has been featured in several international news articles, including by Business Insider, Norway's NRK, and News in Australia, but all of these outlets disclosed that Begg was an active campaigner against the strategy.

It takes place against the backdrop of heightened tension in the Swedish public debate about the country's coronavirus strategy, a debate that has often become abusive on both sides.

Scientist Emma Frans described the Media Watchdogs of Sweden group as a “threat to democracy”, saying that she had turned off comments on her tweets and that she knew of researchers who no longer commented on the coronavirus in the media due to harassment.

Some protesters have accused the Public Health Agency and other authorities deliberately or through negligence of causing unnecessary deaths. On its Twitter account, the Media Watchdogs of Sweden group has described the Swedish coronavirus strategy as “similar to Nazi ideology” and in particular highlighted reports of elderly people not being offered treatment.

Meanwhile, Norway's state epidemiologist Frode Forland reported abuse after he said he did not agree with the Swedish strategy entirely. Readers of The Local have reported receiving xenophobic social media abuse after criticising the strategy, while others said they had been coughed at or threatened for the act of wearing a face mask. 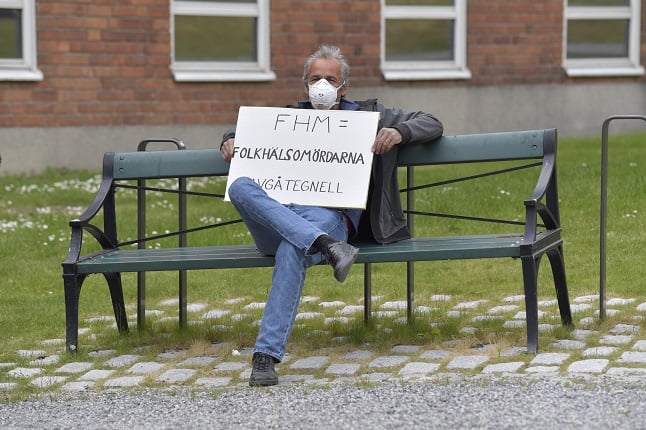