People who live in Denmark but study in Sweden are not exempt from a ban on travel between the countries – unlike those who commute for work. One university rector told The Local that communication about the rules has been unclear and many of her students have been affected, after police tightened their internal guidelines last week.

In total 22 of the students at Art Academy Malmö (Konsthögskolan) live in Denmark, while one lives in Norway where a ban on entry to Sweden is also in effect.

“When the border was closed for the Christmas holidays, it was difficult to get information,” rector Maj Hasager said. She said that communication had not been clear, and that she would like to see students covered by the same exceptions as people commuting for work, who are still allowed to enter Sweden provided they can show a negative Covid-19 test.

“Students have not been exempt since December 22nd, so it has been up to individual police officers to make a judgment at the border, but this was not enforced until February 12th, when the border was tightened. Until then, it was possible for most students to cross the border on a daily basis.”

She was told by police on Friday that the ban had been tightened and that there was no possibility for students to enter Sweden from Denmark if they were not covered by another exemption to the ban. As a result, Hasager was on Tuesday transporting materials to Copenhagen to help students continue their work despite the pandemic.

In a statement from the university, Hasager told students last week: “After speaking with the police authorities it seems like the border is now closed to Sweden from Denmark, the UK and Norway for students. It is still the individual police officer on the border deciding, but there has been implemented a stricter reading of the exemptions – meaning that students are not eligible to cross the border. This means that until 31st March 2021 those of you not residing in Sweden are most likely unable to enter Sweden.”

This is a difference from the ban on entry from non-EU/EEA countries, where “individuals entering Sweden for studies” are exempt from the ban.

A press spokesperson for regional police in southern Sweden, Ewa-Gun Westford, confirmed to The Local that students were not exempt from the entry ban, and that this had in fact been the case since December even if this had not previously been enforced by many officers.

“We haven't changed the law, but the guidelines have been changed,” she explained. “It is up to every individual police officer to make the decision.” 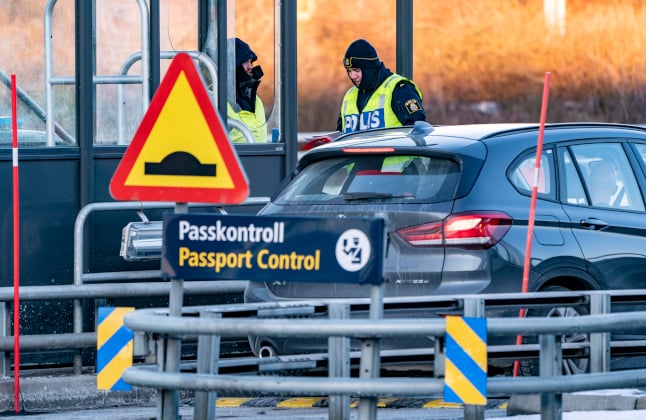 Border police on the Öresund Bridge between Sweden and Denmark. Photo: Johan Nilsson/TT

One of Hasager's students, Vala T Foltyn, commutes between Denmark and Sweden. Although teaching is currently being carried out online, universities in Sweden have the option to carry out certain elements of studies on-site and this is particularly important for courses with practical elements.

As a Fine Arts student, she works in a studio and relies on the access to the materials, equipment and space there to work on her studies as well as produce art to make a living.

The university provided Foltyn with a stamped, signed letter confirming her status as a full-time student and need to travel to the studio to complete her studies and pass the course. Up until last Thursday, this had been sufficient, together with a negative coronavirus test, and she crossed the border as recently as Wednesday without problems.

“But last week the border police became very strict and I spent two hours on the platform waiting for their decision,” she said.

She was ultimately told to return to Copenhagen, and was told by police, verbally and in a form seen by The Local, that the reason was both that her reason for travel did not exempt her from the travel ban, and that she showed “the wrong type of test”.

The border police wrote on the form that the test was negative and had been issued within the past 48 hours as required, but did not meet the Swedish Public Health Agency's criteria.

That's despite the fact that the test result, also seen by The Local, was a PCR test provided by the Danish health service, the same kind of test the student had previously shown in order to make the journey. PCR tests work by detecting RNA, which is the genetic information of the coronavirus.

When The Local asked Swedish police for information about why a test provided by the Danish health service would not be accepted, they referred us to the Public Health Agency, which states that PCR or antigen tests are accepted.

Foltyn, a queer artist, says she moved to Copenhagen from her home country of Poland for political reasons, and has been studying in Malmö since 2019.

“I do not qualify for either Danish or Swedish student support, so I am a self-supported person. It is crucial for me to travel to my studio and work there, since my art practice is not only my education but also provides me money for living and keeping my residency permit in Denmark. We have individual studios, it's actually very convenient for Covid times,” she explained.

The ban on travel from Denmark was first introduced on December 22nd, initially until January 24th but is now extended until March 31st.