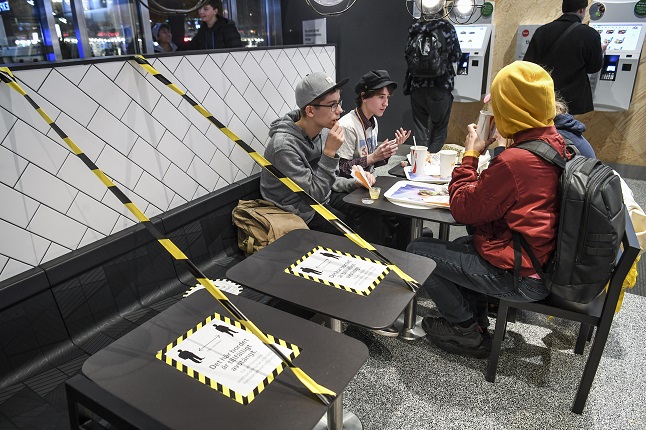 Restaurants have remained open throughout the pandemic, but subject to restrictions like distancing between tables. Photo: Fredrik Sandberg/TT

In January, Sweden rushed through a pandemic law that would allow the government to, among other things, close shops and limit their opening times or customer numbers.

This week proposals were announced to expand that law, including by ordering shutdowns of other businesses such as hairdressers, beauty salons and switching restaurants to takeaway only, as well as empowering local councils to set limits on visitor numbers at public spaces and fine individuals who violate those limits.

If implemented, these measures would bring the measures in Sweden much closer to those seen in most other countries during the past year of the pandemic. But it's not yet clear if and when that would happen.

“We have had a falling number of cases for several weeks, but that decrease has tailed off and it looks like it is heading up again. That is very worrying. Right now we are not bringing in a general shutdown, but we are preparing to be able to use that part of the pandemic law,” said Health Minister Lena Hallengren at a government press conference on Wednesday.

The proposals are currently out for consultation, which means relevant authorities will give feedback on the feasibility before they are put to parliament.

At the moment, they are set to enter in force on March 11th, but Hallengren said the process could be expedited if necessary. Once passed, the measures wouldn't automatically come into effect but the government would be able to introduce them immediately if judged necessary.

“Being in a plateau phase [when it comes to new coronavirus cases] or seeing a small increase is not a reason to take the toughest, strictest measures we can have, that has incredibly far-reaching consequences not only economically,” she told reporters.

Other countries have set out specific thresholds to be met in order for different measures to be changed.

France, for example, set a target of a maximum of 5,000 new cases per day and fewer than 3,000 people in intensive care in order to end its December lockdown, although it ended the lockdown without meeting the case target. Switzerland has said its planned re-opening is based on factors such as the test positivity rate, reproduction rate, intensive care occupancy, and 14-day incidence.

Italy has used an algorithm based on over 20 data points to decide thresholds above which regions are given tougher restrictions, which has prompted some criticism as some areas have been subject to tougher rules than places with significantly more cases per capita.

The Local asked which data and metrics would be looked at in Sweden when making the decision.

“I think we've all learned that there are no very good algorithms for making these decisions,” said the Public Health Agency's director Johan Carlson.

“At the end of the day, it's a matter of a balanced assessment, where are we, where do we want to go, what could be the measures that could help us out in that respect. I know that some countries try to fix levels and so on but it didn't work out very well so it's a general decision on the situation that would decide where we go.”

When The Local asked if authorities could give examples of which specific data or metrics would be looked at as part of this overall assessment, Lena Hallengren said “No, we can't”.

Carlson added: “It's transmission rates, the presence of mutations that could be problematic, it's a balance with where we are in the vaccination, it's an overall assessment. I think all countries operate like that just now.”

Different developments have previously led Sweden to tighten up restrictions; for example closing its borders first to the UK, then Denmark and Norway in response to new more contagious variants, and tightening restrictions during the second wave due to reports of lower compliance with existing measures and a sharp rise in incidence rates.