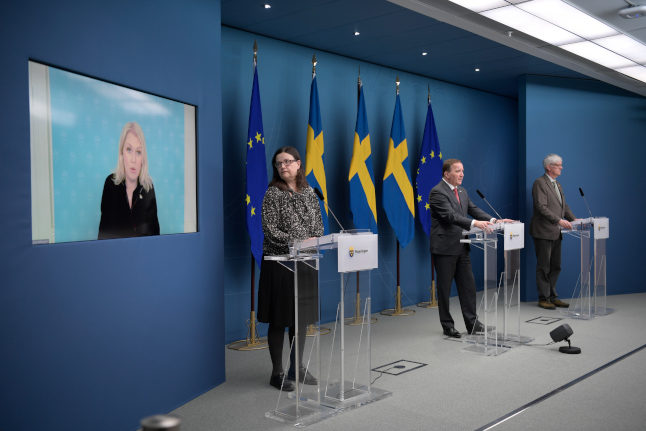 The regulation will apply regardless of whether or not the venues serve alcohol. Sweden has previously banned bars and restaurants from serving alcohol after 8pm, but due to a loophole in the law they have been able to remain open much longer in the evening. They would now have to shut their doors completely at 8.30pm.

Restaurants would still be able to deliver takeaway after 8.30pm, the Public Health Agency confirmed later on Wednesday.

The Public Health Agency is also preparing rules that would further cut the maximum number of people allowed in stores and supermarkets. It is also urging everyone to do their shopping alone, not with family or friends.

“After a year with this virus, we know that we must keep our distance. That's the most effective measure to curb the spread of the virus,” Prime Minister Stefan Löfven told a press conference on Wednesday afternoon.

“This is not the time to relax. There must be no crowding, not at petrol stations or in shops, not anywhere.”

Sweden has famously relied on more voluntary measures than many other countries during the pandemic, arguing that they are easier to keep in place for a longer period of time. But it has step by step tightened its restrictions in recent months, including a Pandemic Law that would allow it to close certain venues.

Non-essential public services are among the places that are currently closed in Sweden. Asked by The Local why the government appeared to be more reluctant to close down private businesses than many other countries, Löfven pointed at some of the measures that were already in place, such as the post-8pm alcohol ban, and said:

“I don't agree with you. During last year, we introduced measures that were very harsh, restricting restaurants, sports events, culture. We were heavily criticised by parts of society because it was too tough.

Almost a year ago, Löfven urged individuals to show “common sense” (folkvett) and take their reponsibility by following the Public Health Agency's coronavirus recommendations, adding that “you can't legislate everything”.

The Local asked if the new and binding restrictions were a sign that people in Sweden were not showing as much common sense as he had hoped. Löfven said: “First, we will learn as we go. Now, we've had this pandemic for a year, so we know more what to do, and second, as I said, this is marathon. Therefore we also need to keep up and update the measures that we have decided upon – we cannot stick to one kind, let's say a year of lockdown.”

He said other countries had seen that people would not put up with lockdown for too long a period of time.

“And we did decrease the number of cases during last spring. We also decreased [cases] from late autumn to now, and now we see an increase again. We need to take new measures. We've always said we are prepared to take new decisions if required. And that's what we're doing.”

Sweden has now seen a rising number of cases for two weeks in a row, with an incidence rate of 445 new cases per 100,000 people over the past 14 days. Some regions, like Stockholm, have introduced regional measures, including urging people to wear face masks at all times on public transport and in close-contact situations.

There have been 647,470 confirmed cases of the coronavirus in Sweden to date, and 12,793 people have died after testing positive.

You can watch the press conference (in Swedish) here: