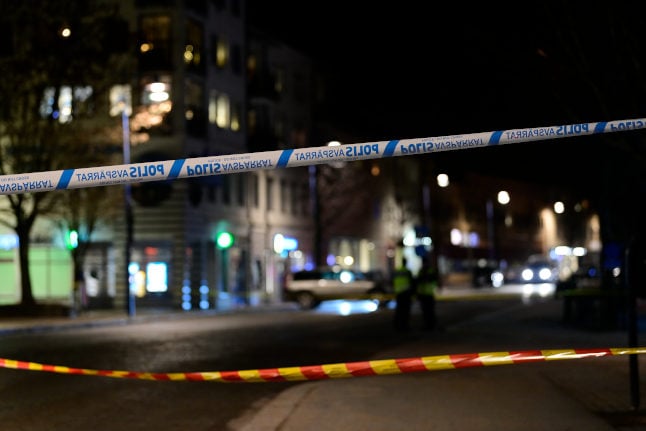 Police on Wednesday evening, at the scene of the violent incident in Vetlanda. Photo: Mikael Fritzon/TT

A police statement early on Thursday revised the number of injured in the attack to seven from eight, and police later said they were no longer investigating possible terror motives.

The suspect, who is in his twenties, was taken to hospital after being shot in the leg by police following the mid-afternoon attack on Wednesday in the southern city of 13,000 inhabitants.

Speaking to AFP, police said the man had used a “sharp weapon”, while local media reported that he had brandished a knife.

Three of those attacked were said to have suffered life-threatening injuries, while two others were in serious condition. All five required intensive care treatment, according to information coming out of the hospital in Jönköping where they were being treated.

The victims were aged between 20 and 70, according to local newspaper Jnytt.

The Swedish intelligence service Säpo will still be involved in the investigation, but have not taken over the case, as happens with suspected terrorism crimes.

The suspect was a 22-year-old resident of the area and previously known to police, but in the past had only been suspected of “petty crimes”. Police did not specify if he was a Swedish citizen.

“We are working intensively and will have lots of resources going forward. We would also really like to come into contact with anyone who has information on the incident. That is also one reason why we cannot come out with a lot of details at the moment,” local police chief Malena Grann told The Local on Wednesday evening about the next step in the investigation.

As of Thursday morning, police said they had been able to carry out an initial questioning with the man overnight, after he received treatment for his injuries at hospital.

“We face these despicable actions with the combined force of the community,” Löfven said.

“We are reminded of how frail our safe existence is,” Löfven added, encouraging people to have the victims in their thoughts, as well as health workers and police tending to wounded and working to restore peace.

Here's Swedish Prime Minister Stefan Löfven's full statement about the attack in Vetlanda. This is not an ongoing attack – the suspect has been apprehended. Police are investigating possible terror motives, but have released few details so far. https://t.co/x9f6i4tZsj

Police have scheduled a press conference for 3pm on Thursday.