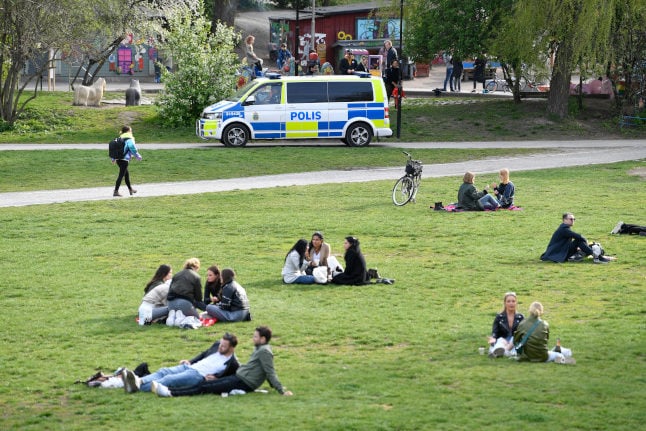 It is currently not allowed to organise public gatherings or events of more than eight people in Sweden, but spontaneous gatherings have been harder to crack down on.

The new regulation, which means that a municipality could ban people from certain outdoor spaces, for example swimming spots, parks or squares, aims to target that.

Municipalities could now in theory impose such bans if they believe there is a risk of crowding, for example if people flock to beaches and parks during a spring heatwave.

If anyone breaks such a ban, they risk being fined up to 2,000 kronor.

Municipalities may only introduce these bans if there is significant risk of crowding, and not across areas so large that it would violate people’s freedom of movement. The Public Health Agency and regional infectious disease doctor must also be given the opportunity to comment before any bans are rolled out.

The risk of infection is smaller outdoors compared to indoors, but you can still catch the virus even in outdoor environments. Everyone in Sweden is urged to keep a distance from all other people, both indoors and outdoors, and avoid making new social contacts. The Public Health Agency has generally spoken about keeping a distance of 1.5-2 metres from other people.

The regulation is linked to Sweden’s temporary Pandemic Law, which expires on September 30th.

The government last month also, as part of the Pandemic Law, put forward a proposal that would give the government greater powers to close down private businesses in Sweden, such as retail hubs, gyms, hairdressers and restaurants. At the time of writing, however, no decision has yet been made on this.