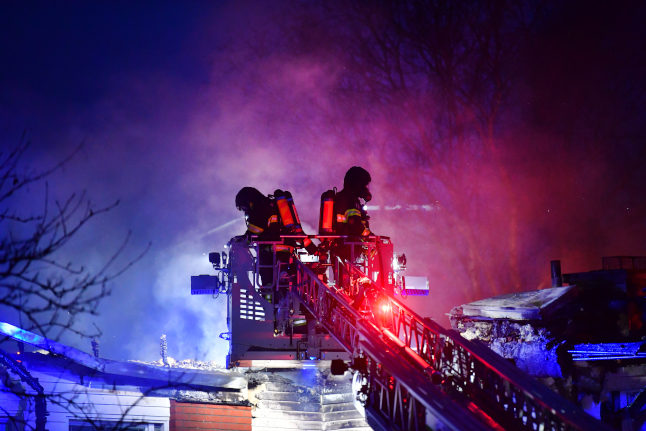 A fire broke out at a row of terraced houses in Märsta, north of Stockholm. Photo: Jonas Ekströmer/TT

Several people had to evacuate after a fire broke out in a row of 16 terraced houses in Märsta, north of Stockholm, on Wednesday afternoon. The fire was discovered on a balcony and then spread to the attic. No one was injured.

Firefighters were still battling the flames at around 9pm on Wednesday. Police launched an investigation into arson, although that is common procedure when it is not obvious what started the fire, and does not necessarily mean that they actively suspect arson.

Swedish job market: 180,000 people unemployed for over a year

Sweden’s employment agency Arbetsförmedlingen has again warned that although the labour market has stabilised, and jobless figures have dropped since last year, there is a very real risk that long-term unemployment will follow in the wake of the pandemic.

Sweden’s current unemployment rate according to the agency stands at 8.7 percent, which is lower than 9.2 percent in July, and 11.6 percent among young people.

Coronavirus variants on the rise in Sweden

Nine out of Sweden’s 21 regions now have confirmed cases of the coronavirus variant first discovered in South Africa, according to Swedish public radio broadcaster Ekot.

It writes that four cases were confirmed this week in Uppsala and ten in Skåne. Stockholm, Gävleborg and Västmanland have also confirmed cases of the variant first discovered in Brazil, but the actual number may be higher. According to the Public Health Agency’s latest data at least 17 regions have possible cases of at least one of these two variants. It is not yet clear whether the vaccines that have been developed so far have the same level of protection against these variants, as it does against the other main variants.

The Public Health Agency’s microbiologist Karin Tegmark Wisell said the spread of infection was “concerning”, but that these two variants did not appear to spread as rapidly as the B.1.1.7. variant (first discovered in the UK), which is on course to take over in Sweden. Experts say the vaccines appear to protect well against this variant.

Western and southern Sweden told to brace for heavy snow

A snow storm was moving in across western and southern Sweden in the early hours of Thursday, with weather agency SMHI issuing class-two and class-one warnings for strong winds and heavy snow (on a scale from one to three; three is the most serious).

Sweden’s Melodifestivalen to get English commentary this year

The competition that selects Sweden’s Eurovision Song Contest contender – Melodifestivalen – will get English commentary this year, to the expected excitement of non-Swedish speaking fans around the globe.

“No country has a selection for Eurovision more anticipated internationally than Melodifestivalen. Week on week thousands of Eurovision fans across the globe tune in, and hundreds who would under normal circumstances be travelling to watch the show live at Friends Arena,” ESC Insight’s Melodifestivalen expert Ben Robertson told The Local.

The show will be broadcast on SVT 1 at 8pm on March 13th. It can also be found on SVT Play – here’s a link to the English commentary and here’s the Swedish version.

Swedish vocabulary: Eurovision Song Contest – Eurovisionsschlagerfestivalen (which is a mouthful, and as in English it is usually referred to simply as Eurovision)

Ben Robertson of ESC Insight shares his thoughts and predictions on the 12 remaining songs competing to represent Sweden at the 2021 Eurovision Song Contest. https://t.co/XKrAwoZNP8

The party secretary of the anti-immigration Sweden Democrat party, Richard Jomshof, has been slammed by other politicians after he referred to Islam as “a despicable ideology and religion” on a debate show by Sweden’s public broadcaster SVT on Tuesday evening.

Ulf Kristersson, leader of the conservative Moderates, who has previously opened up more and more to cooperating with the Sweden Democrats on certain issues, hit out: “Fierce criticism of violent Islamism or other forms of fundamentalism is very justified. But to call the world religion of Islam with its 1.8 billion followers ‘despicable’ is simply despicable. In addition to offending individuals, it contributes to the dangerous polarisation of the social climate that Sweden has already had far too much of.”

Jomshof himself said his statement had been misinterpreted.