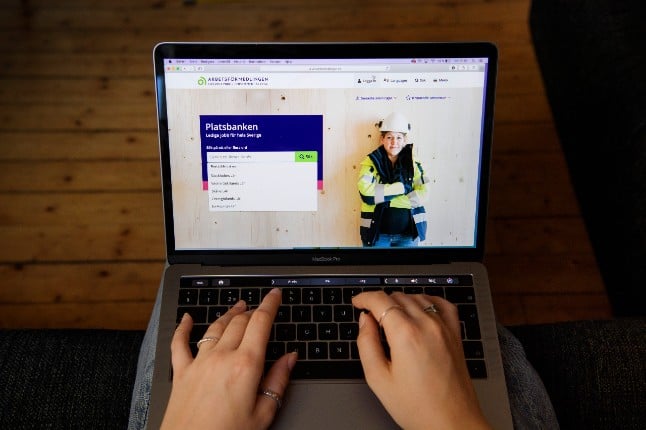 A young adult looks for a job on the employment service website. Photo: Jessica Gow/TT

According to the latest figures from the Swedish Public Employment Service, the number of people who have been unemployed for more than twelve months hit 180,000 in February, the highest level ever recorded.

“This is a serious situation, and an uncertain situation if you consider where we are in the infection,” Sweden’s employment minister Eva Nordmark told the country’s TT newswire.

“In the spring, we had an exceptionally high level of layoffs which have led to where we are now.”

The unemployment rate in February was 8.7 percent, lower than the peak of 9.2 percent reached in July last year.

In its press release, the Swedish Public Employment Service warned that the long-term unemployment rate was likely to rise still higher, hitting 200,000 by the end of the year, as more of those laid off during the pandemic reached their twelfth month without a job.

Nordmark said that the situation would be still worse if the government had not taken rapid action to bring in reforms and support to boost employment.

“We were working more or less 24 hours a day at the start of the year to bring in various reforms and support packages,” she said.

“The budget for this year includes historic investments in the labour market. Our expectation is that this is going to lead to 75,000 new jobs.”

The opposition Moderate party attacked the government for “failing” the long-term unemployed.

“There are now more long-term unemployed than people who live in Linköping,” said Elisabeth Svantesson, the party’s economic spokesperson. “This is an enormous let-down from the government. These people have just been rendered passive and forgotten.”

She said that the number of “new start jobs”, a key Moderate party employment policy, had halved since the Social Democrats came to power in 2014.

“It’s crucial that people remain active, otherwise its difficult to get back. That’s why we’ve proposed a job premium, which will allow you to keep a significantly larger portion of your salary when you’ve been long-term unemployed.

Nordmark said that her party had invested billions of kroner both in strengthening the Swedish Public Employment Service and also funding other job search services.

“It’s a tough situation but I’m hopeful. The day will come when we can lift the restrictions, for example of restaurants and events, which will bring a lot of jobs back.”

Here are the key figures for February: