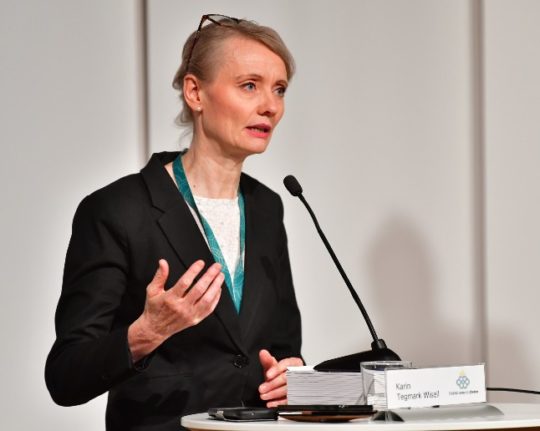 Speaking at the authorities’ bi-weekly press conference ahead of the EMA ruling, Karin Tegmark Wisell said that the agency would “take the time that is needed” to digest the implications of the EMA’s findings, and what they might mean for different age groups, and that it would then take time to redistribute jabs to the regions.

“We will make our own consideration and we will take the time that is needed so we can have a calm confidence that we are taking the right decision,” she said. “We also need to give the regions that are doing the vaccinations supply again. So it will probably take a week or so after we take our decision to have vaccinations up and running again.”

EMA chief Emer Cooke announced hours after the Public Health Agency’s conference that its safety committee had ruled “this is a safe and effective vaccine”, with no evidence of an increased risk of thromboembolic events or blood clots.

Asked by The Local what confidence-boosting measures the Agency was considering to counter worries among the public caused by high profile reports of severe brain haemorrhages and other clot-related illnesses among those who had taken the AstraZeneca vaccine, she said none were planned.

“We have not looked into what we will do in this issue. But… we need to be transparent and clear on what the basis is for our recommendation,” she said. “Other trust building measures have not been discussed.”

It was, she confirmed “a worry” for the agency that the decision to pause use of the AstraZeneca vaccine would lead the public to be less willing to be given it. “We see it as serious that we have needed to pause one of our most important vaccines,” she said.

Sweden’s health authorities have registered 6,467 new coronavirus cases over the last 24 hours, and eight new deaths, while 264 people are currently being treated in intensive case.

“We do not have a decreasing trend,” Wisell said.”It looks like, and we are afraid that there are going to be more cases in the current week in comparison to the past week.”

All regions now in phase two of vaccination campaign

According to Wisell, all regions in Sweden have now begun phase two of their vaccination campaigns, when those over the age of 70, disabled people receiving assistance, and certain health workers will be vaccinated.

“We see a clear correlation between a reduction in cases and vaccinations,” she said, pointing to graphs showing falling cases in elderly care homes (SÄBO).

A long time till summer

Wisell also noted that at this time last year, Sweden had still been at the beginning of its first wave, with several months to go before the onset of summer allowed people to spend more outside, so reducing the rate of infection.

“We now find ourselves in a situation like the start of the pandemic in March, and we know that in March we had a very big spread of the virus, and also in April, with some levelling off in May. Everyone has to understand that we are still in a serious situation.”

In 16 of Sweden’s 18 regions, the so-called British variant B1117 is now dominant, while the Brazilian and South African variants remain less common.

“We should state that the British variant is no dominant in the country, with the possible exception of Gotland,” she said.

You can see the full press conference (in Swedish), here.