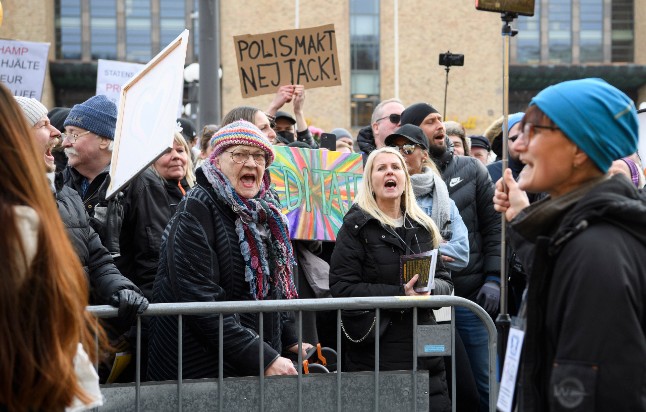 “We’re expecting a lot of people, with a risk of crowing, and we are definitely going to need to remove people from the area,” Peter Ågren, who is leading the policing of the demo in Stockholm, told Sweden’s TT newswire.

Several police officers were injured at the last demonstration against restrictions, the so-called Thousand-man March for Freedom and Truth, on March 6th in Stockholm, when about 500 people attended the protest. Some of the demonstrators are suspected of crimes including violent rioting.

“We saw at the demonstration on March 6th that there are people who are ready to use violence against the police, and who did so,” said Ågren.

Demonstrations have been called in more than 40 countries under the World Wide Rally for Freedom banner, with demonstrations in Sweden being arranged in Stockholm, Gothenburg and Malmö, and perhaps in other cities.

In Stockholm, the arrangers have not asked for permission, and according to Ågren, the demonstration is likely to break the eight-person limit on public gatherings.

“We’re struggling a bit, because there’s no party we can plan this together with so that the demonstrations can be carried out in a way that limits the spread of infection and follows the rules imposed during the pandemic.”

The leaders of the initiative are thought to be based in Kassel, Germany, and according to the investigative website Expo, the movement in Sweden includes people from the extreme-right, conspiracy theorists, and new age spiritualists who believe in alternative medicine.

Ågren said that police would be compelled to break up any group of more than eight people, but he said that his own officers would also have to make sure they were not exposed to infection.

“It makes it harder for us,” he said. “We can’t put them in a situation where the risk of infection in increased.”

He said that police would try to explain to demonstrators that they were breaking restrictions which are there to prevent the spread of infection.

“The challenge for us is that these are people who deny that there’s any problem.”