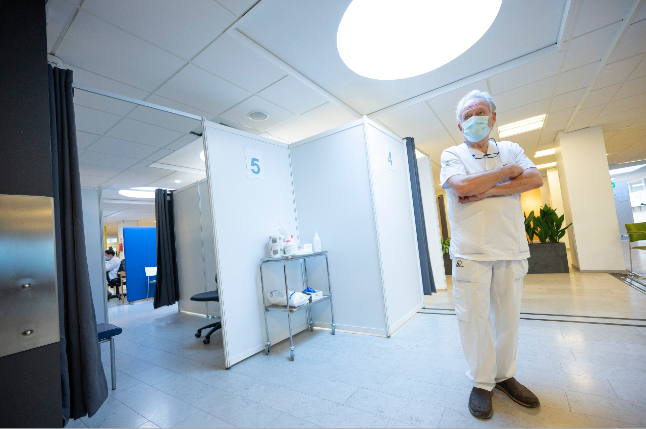 Leo Flamholc, the doctor in charge of the vaccination centre at Malmö University Hospital, looking over his empty premises on Tuesday after vaccinations were paused. Photo: Johan Nilsson/TT

“The Swedish Public Health Agency has concluded that one dose gives sufficient protection that the advantages of giving more people a single dose should take precedent,” the agency said in a press release issued on Friday.

Kristine Rygge, the vaccine coordinator for the Västra Götaland, told the TT newswire that the decision was “an encouraging decision”, which would mean that regions could “vaccinate more people with one dose, faster”.

According to Sweden’s TT newswire, several regions have been pushing for the agency to switch to a one-dose strategy, where the focus would be on giving as many people as possible the first dose before moving on to second doses.

“It would make it possible to give more people a certain protection in preparation for the next dose,” Rygge told the newswire. “It doesn’t mean that you only give one dose, but more that you extend the interval instead.”

According to answers to a questionnaire sent out 21 regions by the newswire, three regions — Sörmland, Västra Götaland and Västmanland — said they supported a one-dose strategy, and none said they were against it.

Pfizer-BioNTech said in February that the two doses of its vaccine should be administered no more than six weeks apart, after the UK opted to allow a gap of up to 12 weeks.

At the same time as recommending a longer gap between doses, the public health agency said it wanted regions from March 19th to increase their focus on vaccinating the elderly.

“In practice, this means, for example, that the elderly and others with an increased risk of illness and death must be offered vaccines before care and nursing staff,” Johan Carlson, the agency’s Director General, said in the statement.

All regions in Sweden have now started phase two of vaccination, which includes: