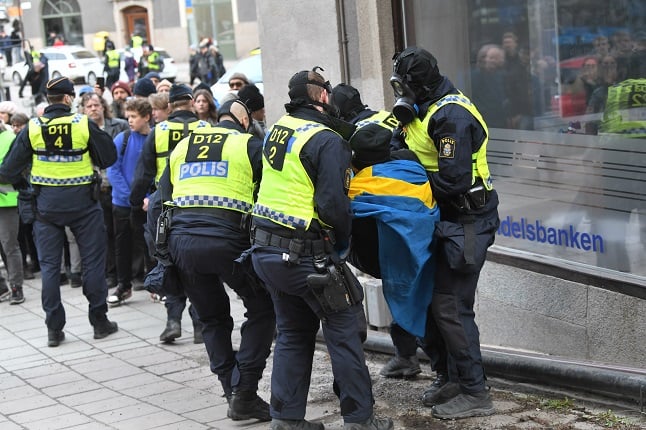 Police remove a protestor wearing a Swedish flag from an illegal demonstration against Covid-19 restrictions on Saturday. Photo: Fredrik Sandberg/TT

On Saturday around 300 people joined protests against Covid-19 restrictions in Stockholm, according to police, along with around 200 in Malmö and 60 in Gothenburg. Of those, 30 were removed from the area or taken into police custody.

Protestors demonstrated against measures such as a ban on public events over eight people and an 8.30pm closing time for bars and restaurants.

“We were well prepared,” Stockholm police’s deputy commanding officer told the TT newswire. Police in Gothenburg and Malmö both said they were satisfied that there had been no violence at the protests, leading to a better outcome than some of the scenarios they had prepared for.

A man who tried to check in at Stockholm’s Arlanda Airport with a fake Covid-19 test result has been sentenced to 14 days in prison and a fine of 800 kronor, paid to Sweden’s crime victim fund.

“The man was going to travel and then the check-in staff were aware that the certificate did not look quite right. The QR code could not be scanned,” Pia Frödeberg, the leader of the preliminary investigation. She said the case, relating to a man aged 26, was likely the first that led to a court conviction.

Many foreign arrivals to Sweden must present a negative Covid-19 test result in order to cross the border into the country, though there are exceptions for Swedish citizens and residents, for example. Travellers leaving Sweden instead need to comply with the entry rules for the country they are travelling to and airline they are travelling with.

Changes to how Sweden will carry out vaccinations

The Swedish Public Health Agency has extended the gap between the first and second doses of Covid-19 vaccines to up to six weeks, meaning it will focus on giving a first dose to as many people as possible before administering second doses.

At the same time as recommending a longer gap between doses, the public health agency said it wanted regions from March 19th to increase their focus on vaccinating the elderly, prioritising them above care and healthcare staff. Previously this was not an explicit priority, with both over-65s and healthcare staff included in the current second phase of vaccinations, along with some other risk groups.

This week’s weather: Has spring sprung?

According to the Swedish meteorological definition, spring has already arrived in most of the country, but the past two weeks have seen a drop in temperatures.

That’s set to change with a warm front moving eastwards on Monday, and temperatures over 10C expected on Tuesday and Wednesday in most of the country, including Norrland, and higher double digits further south. 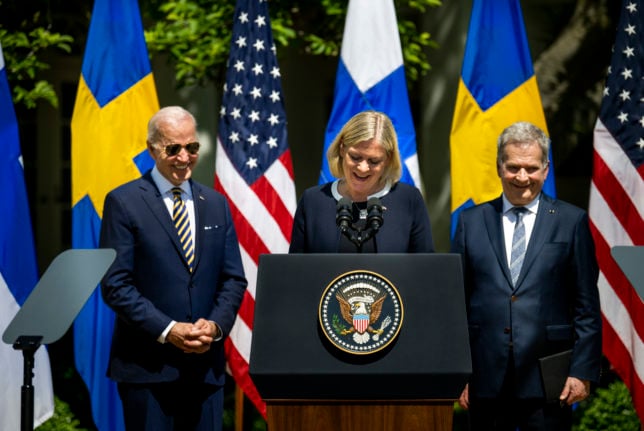 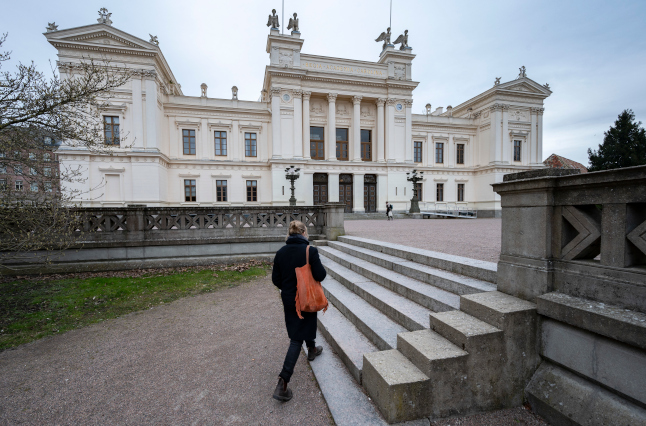 The Aftonbladet newspaper, which describes itself as reflecting an “independent Social Democrat” viewpoint, has switched sides on Nato, with the newspaper’s chief political editor Anders Lindberg arguing in an editorial that Putin’s invasion of Ukraine makes membership of the security organisation necessary.

“Vladimir Putin’s war demonstrates that we need to join Nato to guarantee Sweden’s security,” Lindberg wrote in an article on Wednesday.

“I have never previously supported Swedish membership of Nato,” he explained. “On the contrary, I have argued that non-alignment, a strong national defence, and a pragmatic foreign and security policy has worked extremely well. It has kept us out of war and promoted our national interests.”

“When I read the arguments for continued military non-alignment, I cannot see any answers to the question of how we should compensate for this deficit,” he wrote.

The key will be the position taken by the Social Democrats, the part led by Prime Minister Sanna Marin, and also of the Centre Party, who say they will back Nato membership if the government as a whole does.

The new Swedish Psychological Defence Agency said on Wednesday that there was no evidence the riots over the weekend were encouraged by overseas powers.

“At present we do not see any ongoing inappropriate influence operations against Sweden,” said Mikael Östlund, the communications chief at the Swedish Psychological Defence Agency.

Police on Monday said that ahead of the riots over the Easter weekend, they had seen encouragement coming from overseas social media accounts.

“We know that they is information about encouragement to commit violence against police officers, which has been orchestrated overseas,” said Jonas Hysing, the police officer leading the response to the riots, on Monday. ¨

Lund University wants to make it easier for students from Ukraine to study in Sweden, and has signed an exchange agreement with the Taras Sjevtjenko University in Kiev, it announced in a press release. There were ten Ukrainians studying in lund before Russia’s invasion, and the university aims for that number to increase and for those who are studying to be offered grants.

Swedish PM: ‘Police right to allow Paludan to burn Koran’
Sweden’s Prime Minister, Magdalena Andersson, has said that the police decision to allow Danish far-Right activist Rasmus Paludan to hold
a Koran-burning demonstration was correct under Sweden’s strong freedom of expression laws, and that, equally, those opposed have a right to mount a counter demonstration.
“You have the right to demonstrate against it – but peacefully. What we’ve seen is something totally different, and it seems, as police are saying, that there have also been criminal gangs behind this.”
“It’s important,” she added, “that those responsible are arrested and prosecuted.”
She said the pictures of the riots had been “terrible”. “I have of course had a lot of thoughts about the police officers who were wounded.”
Swedish vocab: yttrandefriheten – freedom of expression
E-commerce falls from pandemic peak in Sweden

Revenues from e-commerce sites in Sweden fell 17 percent in March compared to the same month last year, according to the Swedish Trade Federation, with all the signs being that sales will decline this year compared to 2021.

“The growth in e-commerce is flattening out, but it’s also a fact that the average purchase level in March 2022 was still 70 percent higher than just before the pandemic. The relatively high revenues from e-commerce are shadowed by the record year we saw in 2021,” said Johan Davidson, the trade body’s chief economist.