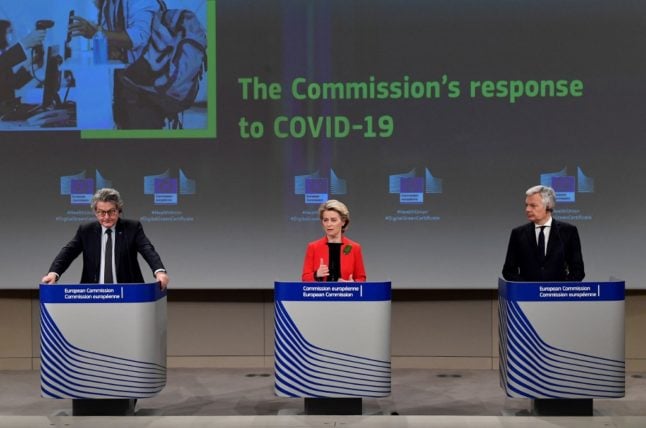 The measure could limit vaccine exports to countries like the UK, which produce some of their own vaccines but do not in turn send doses to the EU.

The EU Commission stated: “We are introducing reciprocity and proportionality as additional criteria to be examined before authorising exports under the EU’s authorisation mechanism for Covid-19 vaccine exports. This will ensure that the EU is able to vaccinate 70 percent of adults by the end of summer.

“We will consider: Reciprocity: whether the destination country restricts its own exports of vaccines or their raw materials, either by law or other means and Proportionality: the epidemiological situation in the destination country, its vaccination rate and vaccine stocks,” the statement published on Twitter read.

“This implementing act is targeted, proportionate, transparent and temporary. It is fully consistent with the EU’s international commitment under the World Trade Organization and the G20. We will continue to exclude from this scheme vaccines for humanitarian aid or under COVAX.”

Officials have said they don’t expect the changes to trigger mass export bans of vaccines produced in the EU.

We are introducing reciprocity and proportionality as additional criteria to be examined before authorising exports under the EU’s authorisation mechanism for #COVID19 vaccine exports.

This will ensure that the EU is able to vaccinate 70% of adults by the end of summer.

In recent days EU Commission chief Ursula von der Leyen has repeatedly threatened to block the export of vaccines produced in the EU. The threat has been backed by the likes of German Chancellor Angela Merkel but sparked alarm in the UK, which has imported large numbers of vaccine doses from the EU.

“Europe has taken every step to act fairly and responsibly, mindful of our global leadership role, since the start of the pandemic. The EU remains biggest global exporter of vaccines,” European Commission Vice President Valdis Dombrovskis said.

Europe’s battle to prevent a deadly third wave of infections has been complicated by a patchy vaccine drive that included several nations temporarily halting AstraZeneca’s shots in response to isolated cases of blood clots.

Most have since resumed using the vaccine after the European Medicines Agency found it “safe and effective”.

But AstraZeneca has delivered only 30 percent of the 90 million doses it promised the EU for the first quarter.