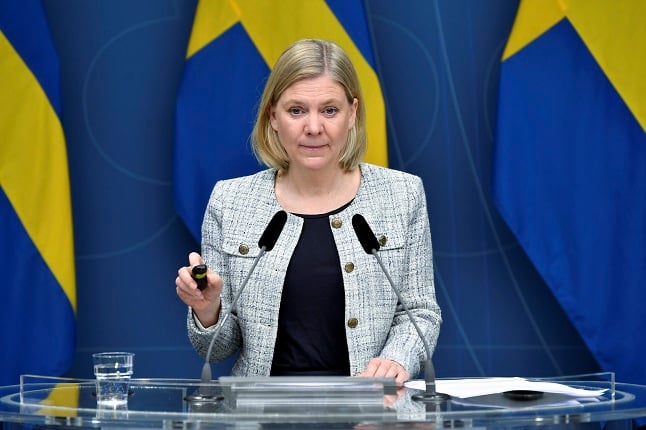 The Swedish government has issued its economic forecast, and it’s more optimistic than previous projections before Christmas, but comes with the caveat that positive developments will depend on Sweden getting the Covid-19 pandemic under control.

She said that the Swedish economy had demonstrated resilience, “above all Swedish industry”.

Sweden has never introduced a lockdown in response to the pandemic, with non-essential businesses allowed to remain open, but many sectors have nonetheless suffered due both to recent restrictions on visitor numbers and opening hours as well as fewer customers as people follow public health guidance to limit socialising and unnecessary trips to shops.

In total, the government has paid out 400 billion kronor on measures to cope with the pandemic, ranging for paying for employees’ first day of sick leave (normally unpaid in Sweden), supporting businesses whose sales took a hit due to Covid, and funding the testing and vaccination programmes.

Andersson said the government was also prepared to take further measures if needed.

“If we need to extend crisis support, there is room for that,” she said. “That’s a lesson from the financial crisis. Then, the crisis packages were taken away too quickly and that stifled recovery. We will not make that mistake again.”

GDP set to rise, but by how much?

Between April and June last year, Sweden saw its biggest quarterly drop in GDP (8.6 percent) in 40 years, and recovery stagnated in late 2020 as the second wave of Covid-19 hit Sweden hard. Even though the current third wave has already surpassed the second, the government predicted that GDP growth would reach 3.2 percent for 2021, increasing further to 3.8 percent in 2021.

“It is our judgement that by the end of this year, we will be back at the GDP level we had before the crisis,” said Andersson.

But economists at major Swedish banks believe the government is too cautious in its prognosis.

“The 3.2 percent for 2021 is quite a lot too low according to our assessment,” Annika Winsth, head economist at Nordea bank, told the TT newswire.

She said that the vaccination programme and warmer weather — which it is hoped could slow the spread of the virus in Sweden while increasing opportunities for outdoor socialising — will help hard-hit industries recover.

An economist at SEB, Olle Holmgren, also called the government’s numbers “quite a cautious estimate”.

The National Institute of Economic Research’s (Konjunkturinstitutet, KI) also expects higher growth than the government forecast, but its head of forecasting, Ylva Hedén Westerdahl, told TT that the estimates were within the same ballpark given the high degree of uncertainty.

Sweden’s unemployment rate is at a higher level than pre-Covid even after a slight recovery in late 2020, and people who are young, born outside the EU, or have a low level of education are particularly hard hit.

The government forecast that the unemployment rate would reach 8.7 percent this year on average, falling to 7.9 percent next year, particularly in the autumn and onwards.

This comes after the Swedish Employment Agency released new figures showing that unemployment was at 8.4 percent last week, down from 8.5 percent one week earlier.