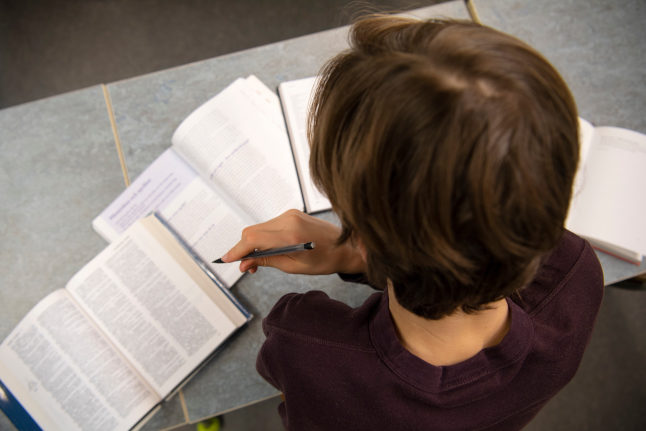 File photo of a student in school. Photo: Henrik Montgomery/TT

“I want to start by urging everyone to keep their distance. That’s what protects us against the spread of Covid-19,” she said, adding that the virus is currently spreading the most at home, at work and at various social gatherings outside of work.

The number of people dying after testing positive for the virus appears to have plateaued, with two forces working against each other: the increased spread leading to more deaths, but the increased rate of vaccinations leading to fewer deaths, because many of the people most vulnerable to serious illness have been vaccinated.

But around 120-140 people per week are still dying, said Björkholm.

More children and young people have tested positive for Covid-19 in recent weeks, and the Public Health Agency now recommends that students who have been close to someone with confirmed infection should be asked to get tested even if they don’t have symptoms.

It will be up to contact tracers to inform students that they have been close to an infected person, and if they don’t have symptoms they should keep going to school while waiting for the test results, according to the Public Health Agency’s recommendations. This does not apply if a household member has tested positive, in which case all other members of the household, including children, should stay at home.

The new recommendations were announced at Thursday’s press conference, but have not yet been published.

The previous recommendation stated that schoolchildren older than six should get tested if they have symptoms. There haven’t previously been any national guidelines on what schoolchildren who share a household with someone who has tested positive for Covid-19 should do regarding testing (but they are told to stay at home), but many regions advise household contacts who are older than six to get tested.

The agency said in a report on Thursday that it believes the increased spread of the virus among younger people is linked to increased testing (children aged 10-19 make up 12 percent of the total number of confirmed cases, and children aged 0-9 make up 2 percent, although few very young children get tested so more cases likely go undetected among children than adults), and the new virus variant B 1.1.7, which was first discovered in the UK and is more infectious than the original variant.