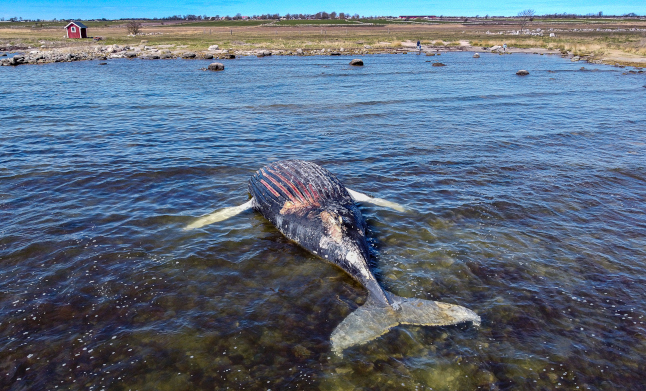 A whale off the Swedish island of Öland is at risk of exploding. Photo: Jonas Ekströmer/TT

Archaeologists have made a rare find in western Sweden, writes the Västra Götaland region in a press release. It’s a treasure from the Nordic Bronze Age, from around 1100-500 BC, and according to the region it is one of the most spectacular finds of its period.

The region said it would reveal exactly what it had found later on Thursday.

How well could the media do their job during the pandemic?

The Swedish government has appointed an inquiry to investigate how well the media and the public were able to scrutinise how the state handled the coronavirus pandemic.

The inquiry will focus on how well public authorities upheld Sweden’s principles of openness and whistleblower protection, and to what extent confidentiality rules restricted journalists’ ability to get access to records and investigate decisions.

It is set to present its report by November 30th.

Explosive whale to be removed from Swedish beach

A dead humpback whale that has been stranded on the island of Öland since April 20th will be removed by authorities, reports local public radio station P4 Kalmar.

The whale is at risk of exploding. Yesterday, the municipality of Mörbylånga issued a public notice stating that it was “dangerous”, and that it was issuing a “strong warning not to under any circumstances approach the whale cadaver”.

A small town on the Swedish island of Öland has issued a stark warning to locals and visitors not to come too close to a nearby beached humpback whale for fear it might explode. https://t.co/iMsqYUPzeg

As The Local reported on Tuesday, Sweden’s national eHealth agency has unveiled the Gröna Beviset or Green Digital Certificate vaccine pass. The pass will be offered to those who have been vaccinated for Covid-19 (although is currently not available to people without electronic ID) which could make it easier for holders to travel within the EU this summer – although it is not entirely clear exactly what this would entail.

Even if the EU agrees on a common format for an acceptable vaccine pass, it will still be up to member states to decide on what will be required to enter their countries. It is quite likely, however, that showing a vaccine pass will be sufficient for most countries.

Here’s what we know so far about how Sweden’s vaccine pass will work.