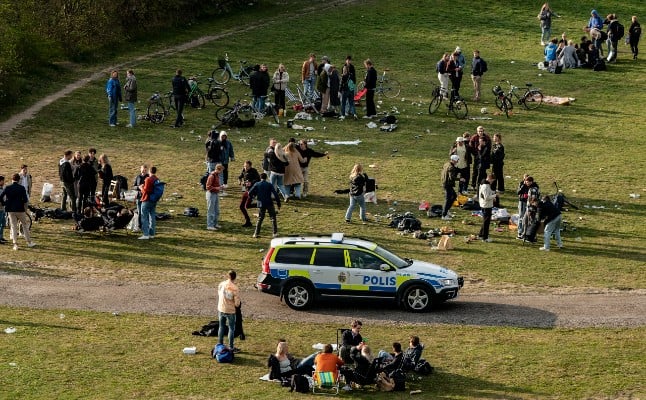 According to Ewa-Gun Westford, a spokesperson for the police in the county of Skåne, students in Lund mostly followed recommendations and avoided celebrating in groups.

“On the whole, people seem to have followed the restrictions,” she said. “Only a few people were taken in for drunkenness – and that was only in their best interests, and we had a few cases of drug crimes connected to the celebrations.”

In a normal year, about 30,000 young people gather in Lund’s main city park to celebrate Walpurgis Night, called Valborg in Swedish, starting drinking in the morning and then going on to gather around the bonfire in the park.

Last year, the city authorities decided to close off the park and spread the grass liberally with chicken manure to deter visitors.

“Sitting in a park that stinks of chicken manure is not a pleasant experience,” municipal chairperson Philip Sandberg noted in a Facebook post.

Westford said that some students had sat outside drinking on Friday.

“It started with a few champagne breakfasts in various green areas, because the city park was close and had a ban on gatherings,” she said. “Our strategy was to move among the young and open dialogue with them.”

In Uppsala, and Östergorland citizens are currently enjoined to follow a “personal lockdown” because of the high level of infection.

Uppsala’s traditional celebrations at the Ekonomikumparken park were also called off, with the park shut off to the public, but according to a report by Sweden’s state broadcaster SVT students still enjoyed the traditional champagne breakfasts.

In Linköping a group of around 400 students in a green area was broken up by police in the early evening, with police arguing that as the event had been advertised on social media, it could be classed as a public event.

“It was a gathering of students taht we treated as a public event. We broke it up and it all went fine,” said Peter Ström, a policeman in Sweden’s eastern region. “It was an unusually calm Friday night and we hardly noticed it was Walpurgis Night.”

In Umeå a party including around 60 students was broken up by the police.