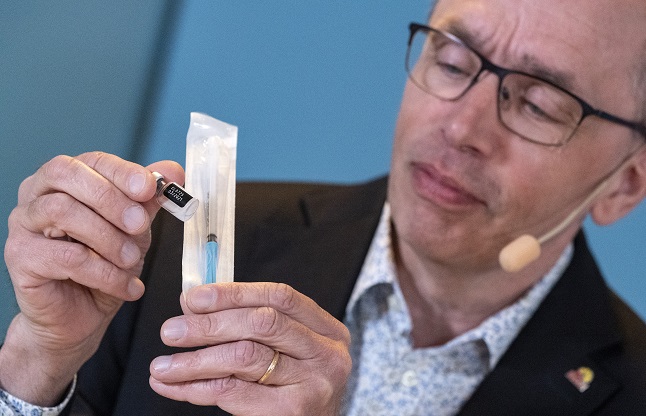 Skåne's regional director holds up a syringe that will be used to give doses of the Pfizer vaccine. Photo: Johan Nilsson/TT

The Stockholm region has started the fourth and final phase of vaccinations against Covid-19. In this phase, all adults will be offered the vaccine, but it will still be offered in a staggered way starting with the oldest. That means that to begin with, people aged 55-59 will be able to book appointments.

Two companies that run vaccination centres in the capital region, Kry and Doktor 24, told the TT newswire they did not get any advance notice that the region would be starting the next phase.

“It would have been good to have a little foresight so that we could have scaled up the capacity,” said Sara Dannborg, communications manager at Doktor 24.

At the moment, Stockholm has capacity to vaccinate 75,000 people per week, but expects to receive many more doses than this over the next two weeks.

Kalmar, Jönköping and Värmland have already opened up vaccination to under-60s, with Skåne saying it aims to offer the vaccine to all adults from mid-June onwards.

Sweden’s schools are not living up to their duty to take measures against the spread of Covid-19, according to the Work Environment Authority, which has received more than 10,000 complaints on the topic.

The authority has also carried out 125 inspections to check the measures put in place in schools, and found shortcomings in around half.

It comes after the Public Health Agency warned this week of a rise in cases among children and teenagers, after more widespread testing of this age group began.

Over 900 pregnant women in Stockholm were not given a place on birthing wards when they gave birth during 2020, a report by SVT Stockholm shows.

Instead they usually gave birth in rooms not intended for childbirth, which in some cases had negative affects of patient safety, for example if the room did not have the right equipment. In one case, a woman was sent home and gave birth in her own shower, and the report found that one child died because of the lack of hospital bed.

This is the first time the region has reviewed how many people were not given an appropriate hospital bed when they gave birth. A total of 28,362 births were recorded last year in Stockholm, and 80 women were directed to a different region while 929 were not given a suitable hospital bed.

Swedish vocabulary: to give birth – föda

Sweden’s rules about labour migration are currently under review, and the government hopes to update legislation at the start of next year. The proposals were sent out for consultation and now relevant actors, including trade unions and the Migration Agency, have given their feedback, which we have reviewed in depth.

The police and trade union LO were in favour of an employment contract being required for a work permit to be granted, as a step to crack down on employers who offer worse conditions to foreign workers once they arrived. But agencies including the Migration Agency, Confederation of Swedish Enterprise, the Association of Swedish Engineering Industries (Teknikföretagen) and the Federation of Swedish Farmers (LRF) were against the idea, saying that instead fraud could be counteracted by requiring employers to submit reports if the conditions changed.

Police investigates a small spate of explosions in Malmö overnight, which took place between 2.45 and 3.18am in nearby neighbourhoods. One was outside, one in the stairwell of an apartment building, and one at a shop.

According to Sydsvenskan, no-one was seriously injured but one person was taken to hospital for checks and several apartments were evacuated. No-one has yet been arrested.

TODAY IN SWEDEN
Today in Sweden: A round up of the latest news on Friday
Url copied to clipboard!