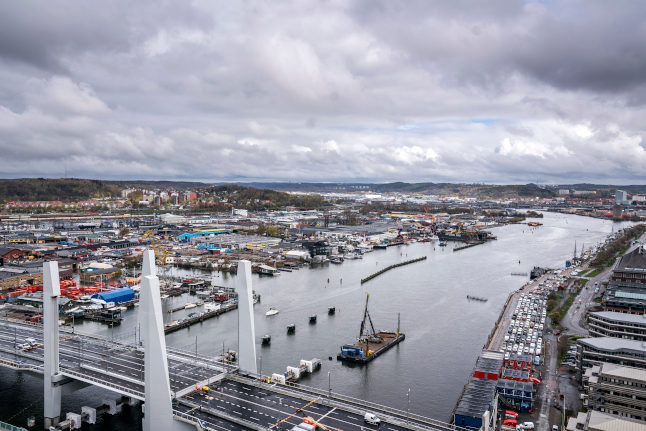 Royal palace ruins from the 16th century have been found, almost by accident, at a construction site in the town of Eskilstuna, central Sweden, where an eight-storey building is currently being built, reports local newspaper Eskilstuna-Kuriren.

The palace Eskilstuna Hus was converted from a monastery by one of Sweden’s most famous monarchs, King Gustav Vasa, but burned down in 1680. Leftover material from the burned-down palace was later used to help build Stockholm’s Royal Palace.

Around 16,000 people have been diagnosed with post-Covid, or Long Covid as it is also sometimes called, in Sweden, according to a report by public radio broadcaster Ekot.

Their symptoms vary between mild and more serious, and the real figure may be higher, because the diagnosis was only introduced last autumn, months into the pandemic.

The new Hisingen Bridge opened in Gothenburg, western Sweden, on Sunday, connecting the Hisingen district with central Gothenburg. It can be seen on the right in the picture below, next to the old crossing, the Göta Älv Bridge which was built in 1939. What does England’s ‘amber’ travel list mean for Sweden?

In preparation for reopening travel, the UK government has published a “traffic light” system assigning a level of red, amber or green to every country in the world.

Sweden is on the amber list (which currently applies to England only – the devolved nations of Scotland, Northern Ireland and Wales have not announced when they will lift travel restrictions but have not indicated that they intend to impose different rules).

People can travel from amber list countries for any reason – there is no need to prove that your trip is essential and entry is not limited to UK nationals or residents. However, arrivals must have a negative Covid test to show at the border, complete a passenger locator form, quarantine for 10 days and pay for travel-testing kits.

In preparation for reopening travel, the UK government has published a "traffic light" system assigning a level of red, amber or green to every country in the world. Here's the situation for the nine countries covered by The Local. https://t.co/IQuYY8vQgi

Prices for summer houses in Sweden have continued climbing steadily over the past 12 months – on average a 15 percent increase compared to last year, according to insurance company and real estate agents Länsförsäkringar Fastighetsförmedling.

The biggest increase is found in Gävle municipality, on the east coast of Sweden around 170 kilometres north of Stockholm, where prices rose 36.3 percent in the past year. A summer house in Gävle now sells for around 1,653,806 kronor.