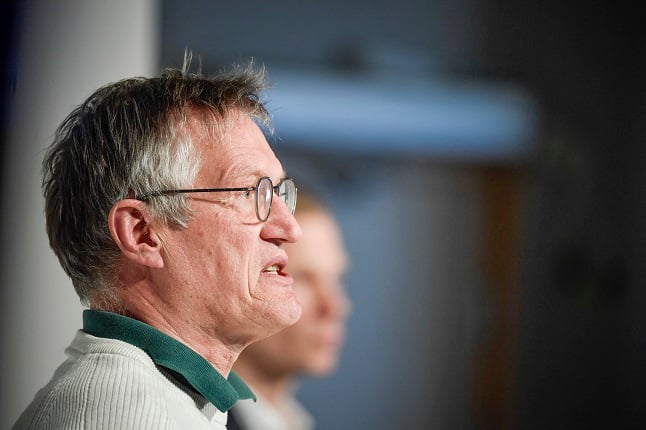 In the new version of its guidelines, updated on May 5th as Swedish journalist Emanuel Karlsten was first to report, the agency says that Covid-19 is not considered to be an airborne disease, but it now states: “There can, in certain situations, be a risk of spreading infection despite keeping a distance. One such situation may be being with other people in a crowded indoor space with limited ventilation.”

It comes after the World Health Organisation (WHO) and US Centre for Disease Control (CDC) updated their own guidance in a similar way, but an agency spokesperson told Karlsten this was a coincidence and the Swedish guidelines were changed to offer “clarification” after receiving questions on the topic.

Up until recently, the Swedish guidelines (still visible in archived versions of the page, and in the screengrab taken by The Local below), said: “No, Covid-19 is not an airborne disease. With airborne transmission, viruses or bacteria can be transmitted in small droplets or in the form of particles that remain in the air for a long time, and where the infection can be carried over longer distances. Measles, chickenpox and tuberculosis are examples of infections that spread in this way.”

The page also said that the virus could be transferred through surface transmission, but noted it was not clear how this occurs with Covid-19. The new version states that current scientific knowledge suggests that surface transmission only plays a limited role in the spread of Covid-19.

It’s not the first time that the agency has acknowledged that the virus can spread even when a distance is kept.

In September 2020, The Local asked state epidemiologist Anders Tegnell for clarification on the agency’s stance on airborne transmission after some regions asked all residents to avoid non-necessary visits to indoor public places.

“There has been a lot of discussion on airborne or droplet transmission,” he said. “I think, to me and the agency, that’s not really important. We do realise that both kinds of spread can occur, droplet is by far the most important one which you can also see if you look at the homepage of CDC and others.”

There are still differences between the guidance from WHO and from the Swedish authorities.

The Public Health Agency does mention ventilation in a separate page, which has been available since November 2020 and which states it is important that ventilation systems in public places, schools and workplaces “work as they should”. It says that in schools, for example, ventilating classrooms between lessons “can be a complement to regular ventilation” but that it is unclear what effect this has.

Meanwhile, Krisinformation.se, the website that gathers information on emergencies from Swedish authorities, had no references to the role of ventilation in preventing spread of Covid-19 when The Local reviewed the site.

Recent cluster outbreaks have highlighted the lack of understanding of the role played by ventilation.

A Walpurgis concert, organised by the public radio broadcaster, led to all eight singers testing positive for Covid-19. The concert’s organiser told SVT: “We did everything right with space, distance, had different entrances, used face masks, so I have to say I was a bit surprised. It is hard to understand.”

That’s despite it being long known that singing is a particularly high risk activity, with outbreaks linked to choirs and performances reported around the world during the first and second waves of the virus – even when members kept distance from each other.

In fact, Sweden’s Public Health Agency had issued similar guidance. Its page on guidance for choirs has included advice to use a “large, well-ventilated venue” if being outdoors isn’t possible, since at least last August.

Sweden has primarily used non-coercive measures to curb the spread of the virus, relying on individual responsibility. But regions have repeatedly reported low public compliance with guidance such as keeping visits to shops as short as possible, wearing masks in indoor public places, and avoiding meeting people outside your closest circle of contacts – all of which are important precisely due to the risk of the virus spreading even when distance is maintained.