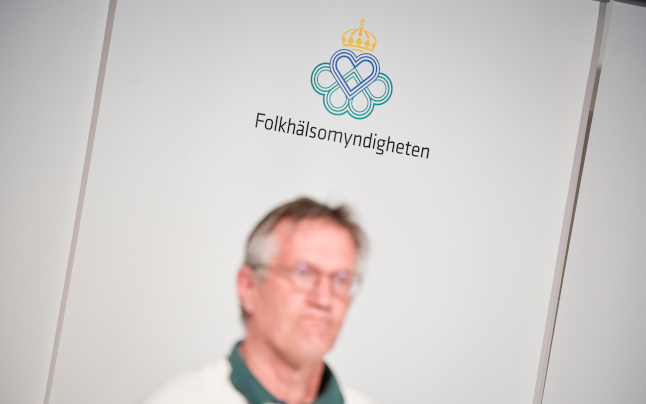 The Swedish Public Health Agency (Folkhälsomyndigheten) is set to present a plan today for how and when to potentially start lifting coronavirus restrictions. Photo: Pontus Lundahl/TT

Sweden never fully locked down during the pandemic, but some restrictions have been imposed at various points in the past year. The Swedish Public Health Agency is set to present a new plan today outlining exactly how Sweden could adapt or remove them step by step.

The plan has been ordered by the government and is meant to clearly link the lifting of the measures and “a new normal” to the level of Covid-19 infection in Sweden, as well as what measures the Public Health Agency thinks may still be needed in the longer term.

Some of the restrictions that are about to run out at the end of the week unless they are extended include the 8.30pm closing time for bars and restaurants, and restrictions on cultural and sporting events. They have already been extended several times in recent months.

Sweden is expected to stop using the Astra Zeneca vaccine in just over three weeks. Around 200,000 more doses are needed, and they will mainly be for people who have already received a first dose of Astra Zeneca and are waiting for their second dose.

Sweden is also using Covid-19 vaccine by Pfizer and Moderna. More than 36 percent of the adult population (over-18s) have received at least one dose of a Covid-19 vaccine.

Swedish vocabulary: (to) use – (att) använda

Sweden has had its hottest day of the year so far, in stark contrast to last week’s snow. The mercury jumped to 27.8C in the Östergötland region in south-eastern Sweden on Monday – just days after what seemed like a spring so long and cold it would never end.

And temperatures are expected to stay relatively high in most of Sweden in the coming days. The sun is the most likely to make an appearance in eastern parts of southern and central Sweden on Wednesday, with temperatures of above 20C. And on Ascension Day, a public holiday, the sunny weather is also expected to reach northern coastal areas.

Western Sweden is forecast to get slightly cooler weather, with rain, which may reach the rest of Sweden on Friday. A mix of rain and sun is in store for the weekend.

More and more Swedish regions are now starting the final phase of their vaccination programmes. The vaccination booking process may vary slightly around the country, so we have put together quick English-language guides for people in Stockholm, Skåne and Västra Götaland. This covers Sweden’s three most populous regions, but you can also read this article for a more general guide. Finally, this article explains where the vaccination programme is up to in all of Sweden’s 21 regions.

If you are a foreign resident of Sweden, we are interested to hear about your experience booking the Covid-19 vaccination. Please help us by answering The Local’s survey.

We've already had a couple of emails from readers who struggled to book their vaccination appointment without a Swedish personnummer (which *in theory* should not be a barrier). Keen to find out if this is a common problem or if you've generally found the process simple. https://t.co/p5nRBD71dI

The anti-immigration Sweden Democrat party has launched an internal investigation after the party’s group leader on the Gothenburg City Council, Jörgen Fogelklou, was accused of being behind a number of racist online accounts (which he himself denies).

The news emerged after the Aftonbladet newspaper investigated Fogelklou’s alleged connection to the account “afghan” on Swedish internet forum Flashback, an account which spread extreme anti-Semitism and racism in 2010 and 2011.