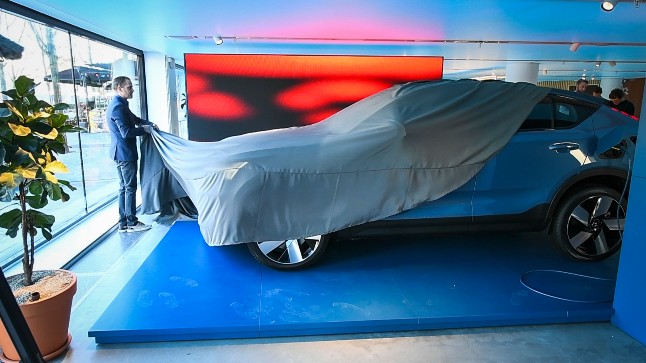 Volvo unveiled its new C40 Recharge electric vehicle in Stockholm in March. Photo: Claudio Bresciani/TT
Sweden delays relaxation of Covid-19 events restrictions until at least June 1st
The limit of eight people at public events will only be lifted from June 1st at the earliest, after the government once again postponed the planned easing of its Covid-19 measures.

“Even though we can see a small reduction at the national level, the spread of infection is still at a high level,” said Prime Minister Stefan Löfven at a joint press conference on Wednesday.

This means that the current maximum limit of eight people at public events, first introduced in November, remains in place. This applies to sport and cultural events as well as demonstrations and religious services, for example. Read our story here.

One of the leaders of the Swedish neo-Nazi group Nordic Resistance Movement (NMR) has been found guilty of hate crimes for two racist posts he made on a Russian site, the Göteborgs-Posten newspaper has reported.

The 30-year-old, who had a leading role in the NMR demonstration at the Gothenberg Book Festival in 2017, has previously been found guilty of violent rioting.

The two posts included a swastika, pictures of the Nazi “Sieg Heil” salute, and the Jewish Star of David.

Sweden’s climate emissions fell by a record 6.8 percent in 2020

Emissions of greenhouse gasses in Sweden fell by a record 6.8 percent in 2020, Sweden’s Environmental Protection Agency has reported in its preliminary report, the greatest fall since measurements began in 1990.

“It’s a record reduction, the only year that comes close is the financial crisis in 2009,” said Anna-Karin Nyström, the agency’s head, but she warned that emissions seemed likely to bounce back to 2019 levels in 2021, putting Sweden’s 2045 target at risk.

“To reach our climate goal of having zero emissions by 2045 the reduction must be this big on average ever year, perhaps even a little bigger.”

Volvo Cars has begun work on a potential return to the Stockholm Stock Exchange later this year, the company has announced in a press release.

“We have supported the transformation and growth of Volvo Cars for the last 10 years, enabling the company to become a true premium brand with improved profitability,” said Eric Li, Chairman of Zhejiang Geely Holding, the parent of Volvo Cars, and Chairman of its Board of Directors.

“As we look ahead, Volvo Cars is especially well-positioned to deliver continued growth and harness the full potential electrification and the delivery of safe autonomous drive functions. After a potential listing, Geely Holding would remain a major shareholder.”

The board has also decided to extend chief executive Håkan Samuelsson’s contract to the end of 2022.