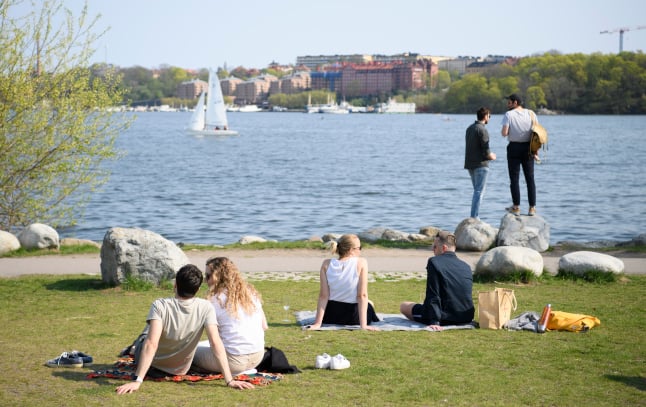 Stockholmers in the Rålambshov park on a sunny Ascension Day. Photo: Henrik Montgomery/TT

The government has ordered state-run authorities to keep making sure that as many as possible in the public sector can keep working from home until September 15th.

It means that government agencies must ensure that only employees whose physical presence is needed for their work are on their premises. The order was initially in place until July 1st, but was extended this week to help curb the spread of coronavirus.

Everyone in Sweden is recommended to work from home if they can, regardless of whether they work in the public or private sector.

Nice weather you’re having, shame if anything were to happen to it

Temperatures soared to over 20C in southern and central Sweden with wonderful summer weather in large parts of the country on public holiday Ascension Day.

But on Thursday evening a thunderstorm hit western Sweden, and unstable weather is in store for the weekend and next week, with rain, clouds and falling temperatures. We hope you enjoyed the summer while it lasted.

Sweden is set to follow the course set by its neighbour Denmark and see a marked shift in public rhetoric and ever-stricter policies on migration and refugees, now that the populist Sweden Democrat party has shaken off its pariah status, the party’s leader Jimmie Åkesson has told The Local’s contributor Richard Orange in an interview.

As a news site run by immigrants for immigrants, this is an important topic for us, so we’ve also published a longer version of the interview. We will keep covering Swedish parties and their increasingly tough migration policies in the run-up to next year’s election.

The so-called cordon sanitaire that long barred the anti-immigration Sweden Democrats from real political influence is now well and truly gone. The Local spoke to the party's leader Jimmie Åkesson about how he thinks he can now change Swedish politics… https://t.co/6UNG9k9SGa

As The Local reported earlier this week, Sweden’s government on Wednesday delayed a planned relaxation of restrictions for the third time running, arguing that the infection level had been falling too slowly to safely to lift controls.

But together with the announcement, the Public Health Agency released a proposal to a staged reopening which will see all restrictions lifted by September, building on the three-stage plan it first published in March. This is how it will work.