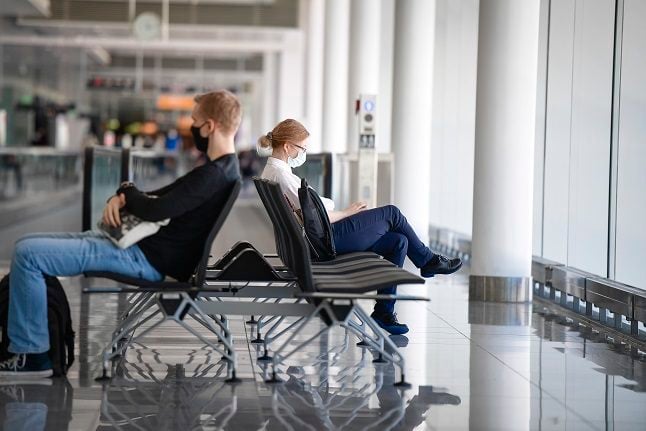 Travel restrictions have changed several times over the past year. The Local's team reviewed the current rules for travel to Sweden. Photo: Stina Stjernkvist/TT

If you’re travelling from an EU/EEA country:

Be aware that new restrictions could be introduced over the summer if authorities judge them necessary; this has previously been the case for Denmark and Norway, based on factors such as the spread of new variants and the alleged risk of people travelling from locked-down Denmark and contributing to crowding in Swedish shops or restaurants.

In order to enter Sweden from an EU/EEA country (again, except from Denmark, Finland, Norway and Iceland), you need to show a negative Covid-19 test no older than 48 hours (measured from the time you cross the border). Proof of vaccination is not accepted as an alternative, although that may change with the introduction of an EU-wide “green card” set to be introduced in late June.

Some people are exempted from the test requirement, including Swedish citizens and people who live in Sweden.

If you’re travelling from a non-EU country:

There is currently a ban in place on travel to Sweden from most non-EU countries (this includes the UK, which was treated as an EU/EEA country until the end of 2020). There are several exceptions to the rule, including Swedish or EU/EEA citizens, people who live in Sweden, or people travelling for certain purposes like urgent family reasons. People travelling from certain countries, decided at the EU level, are also exempt. Currently that includes Australia, Israel, New Zealand, Rwanda, Singapore, South Korea, or Thailand.

The entry ban is currently in place until at least August 31st, but this could be extended further.

In addition to belonging to one of the exempted categories, you also need to show a negative Covid-19 test no older than 48 hours (measured from the time you cross the border). Proof of vaccination is not accepted as an alternative. You can find further information about the test requirement from the Public Health Agency.

Some people are exempted from the test requirement, including Swedish citizens and people who live in Sweden, but further recommendations about testing and isolating on arrival may apply to you regardless of your citizenship and residence status (see below). Testing and isolation on arrival?

To make matters more confusing, there are also guidelines in place that outline what happen after you travel to Sweden. Travellers arriving in Sweden should take two tests for coronavirus, including those exempt from travel bans and those exempt from the requirement to show a negative test on arrival – BUT note that a series of exceptions were brought in on June 1st (more on this in the next section).

People who do not need to show a negative test to enter Sweden should take a test for coronavirus as soon as possible after arrival, and a second test five days later. Some airports offer testing, and you can also arrange this at home by calling 1177 or your local doctor’s surgery.

People who took a test less than 48 hours before arriving in Sweden also need to take a second test five days after arriving.

Returning travellers, unless they fall into the exempted categories below, should also self-isolate for seven days on arrival. This means avoiding all non-essential close contact (for example, having groceries delivered rather than going to the shops). You should not go to work, school, shops, use public transport, or have visitors inside your home. Anyone who lives in the same household should isolate too, even if they did not travel. You can find the full guidelines from the Public Health Agency.

Who do not have to self-isolate?

Starting from June 1st, people travelling from the EU, EEA or Schengen countries, or from the UK, Australia, Israel, New Zealand, Rwanda, Singapore, South Korea and Thailand, are no longer be asked to self-isolate or get a second test on the fifth day, as long as they don’t show symptoms of Covid infection. Fully vaccinated and asymptomatic people will also be exempt from the recommendation, regardless of where they travelled from. Note that this recommendation only applies to people who are allowed to travel to Sweden under the current rules.

Where to find out more:

All information was correct at the time of publication, but the situation can change at short notice. You can check the “Updated” time in the top left corner of the article to see when we updated this webpage. The Local recommends that before any travel, you check Sweden’s national authorities for information on the latest restrictions and exemptions – that’s the police and the government.

Be aware that information provided elsewhere, for example on the ReOpen EU website, may not be up to date.