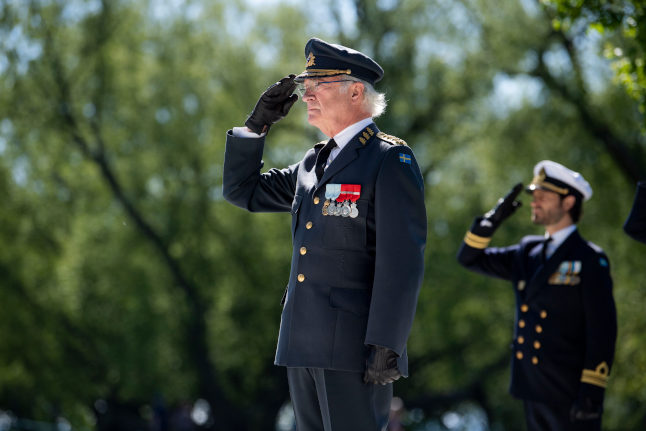 King Carl XVI Gustaf and Prince Carl Philip at a ceremony on Veteran Day, May 29th, a day in honour of Swedish civilian and military veterans. Photo: Pontus Lundahl/TT

Shortage of interpreters for non-Swedish-speaking patients

Swedish public radio broadcaster P3 Nyheter reports that there is a shortage of interpreters in the healthcare sector. In several languages – including Somalian, Dari and Urdu – there is no authorised interpreter at all, according to the radio station’s investigation.

Patients who don’t speak Swedish are legally entitled to receiving healthcare information in their language. But a doctor interviewed by P3 Nyheter says that the shortage could lead to medical risks for the patients, if they don’t fully understand instructions given by their doctor, for example how to take prescribed medication.

SmiNet, the database that is used for registering infectious diseases, has reopened after a series of attempted data breaches, said the Public Health Agency. It said the next update on Sweden’s coronavirus cases would come once the system is fully back up and running and regional healthcare authorities have reported their data to the database.

Sweden normally updates its coronavirus data Tuesday-Friday, but the last update came Thursday last week, before SmiNet was shut down while the incident was being investigated.

Women in southern Swedish region Skåne will be offered kits to carry out smear tests themselves at home rather than by a gynaecologist, reports public broadcaster P4 Malmöhus. The swab tests – which are meant to increase uptake of screening for the Human Papilloma Virus (HPV) which can lead to cervical cancer – are sent home to women when it is their turn, and they can then return them by post for analysis.

The scheme was launched on a trial basis during the pandemic and around 40 percent of tests were returned, around the same uptake rate as in-person tests by the gynaecologist. It will now become the standard procedure in Skåne from September 1st onwards.

The news only came on Friday afternoon last week, so in case you missed it: Sweden has extended the entry ban for non-EU travellers through the summer, but is lifting a requirement to show a negative Covid test for visitors from the Nordics.

From May 31st, it will be possible to travel to Sweden from Denmark, Finland, Norway and Iceland without having to show a negative Covid-19 test on the border. But the test requirement for people from other EU/EEA countries has been extended until June 30th.

The entry ban on travellers from non-EU countries has been extended to August 31st.

HERE’S everything you need to know about the rules for travelling to Sweden.