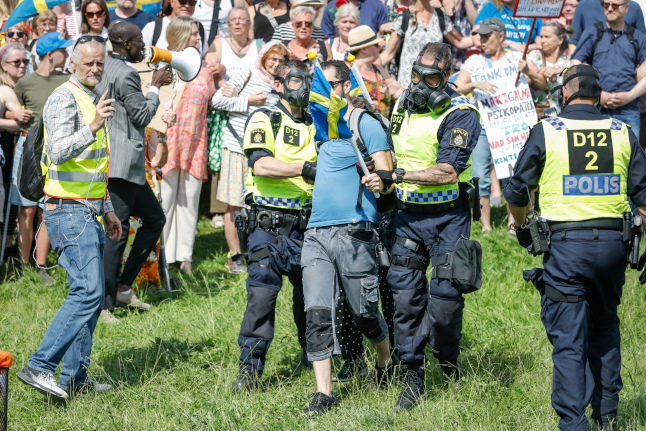 The 848 bus between the university town of Uppsala and the smaller town Sala have been cancelled three nights in a row, after rocks were thrown at the buses, reports the TT news agency, citing an article by regional newspaper Upsala Nya Tidning.

Traffic is set to resume on Monday evening and public transport operator Nobina is in talks with the police, but if the problem continues the evening service will be cancelled.

Sweden’s National Day celebrations on June 6th (which in normal times don’t come close to reaching the excitement, pomp and circumstance of those of its Norwegian neighbours) were a more subdued affair than usual, adapted to the pandemic for the second year in a row.

But the flag was still hoisted at the Skansen outdoor museum as usual, and King Carl XVI Gustaf spoke at the Stockholm Royal Palace, joined by Queen Silvia.

“To me personally, the flag represents tradition and community – but also optimism and faith in the future,” said the King as he reflected on post-pandemic life in Sweden.

Police arrested three people on suspicion of organising a demonstration without a permit, as what TT described as “at least a couple of hundred people” marched along Strandvägen in Stockholm to the Gärdet park to protest against coronavirus restrictions.

Public gatherings are currently restricted to a maximum of 100 people under Sweden’s temporary pandemic laws, a limit which was raised from eight people on June 1st. The protesters call themselves “the Freedom Movement”. Photo: Christine Olsson/TT

Tens of thousands of users’ information leaked in Klarna bug

More than 83,000 users’ information was shared after a technical glitch at Klarna, reports the DN newspaper, citing an internal report by the Swedish digital payment service. In around 15,000 of the cases, this information was identifiable, such as email addresses. However, no banking details were shared, according to the report.

The tech glitch meant that users were able to log in and see each other’s information for around half an hour in May, before Klarna shut down the app and fixed the problem.

“We have very rigid test checks, but unfortunately things can still go wrong sometimes. That’s what happened in this case, quite simply. That said, of course we are analysing what we could have done differently to avoid this type of error in the future, and we have identified some measures that we believe would reduce that risk,” Klarna CEO Sebastian Siemiatkowski told DN.