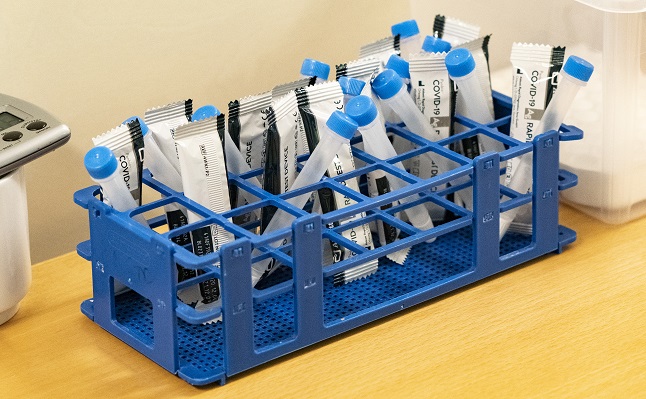 How wide is the spread of the Delta variant?

On Tuesday, the Public Health Agency stated for the first time that there was “community spread” of the Delta variant of the coronavirus, also called B.1.617.2 and first discovered in India.

There is no exact definition for community spread, which essentially means that a virus or in this case a specific variant is being transmitted widely. It means there are more cases detected with no link to travel and sometimes no link to other known infection chains, so authorities cannot track the spread precisely and an average member of the public has a higher change of being infected.

The agency’s own data shows that for several weeks, cases have been discovered with no apparent link to travel.

Up until June 17th, a total of 207 individual cases of the Delta variant have been confirmed in Sweden across 13 regions, the Public Health Agency said on Thursday.

But that doesn’t quite tell the full story, because not all positive test results are sequenced to see which variant they are, so there may be other cases that aren’t shown in the data.

In the Uppsala region alone, contact tracers have identified nine different chains of infection with no apparent connection to each other.

So will the Delta variant become dominant in Sweden?

“We will have to see which of the Alpha or Delta variants becomes dominant in the long term, today it is a bit unclear,” said Anders Tegnell on Thursday.

The graph below shows how the Alpha variant (B.1.1.7, first reported in the UK) quickly became the dominant variant in Sweden, but has recently seen a dip while the Delta variant is making up a small but increasing proportion of all confirmed cases. This graph, shared at the Public Health Agency’s Covid-19 briefing, shows which variants have been present in Sweden over time. The turquoise line represents the Alpha variant (first reported in the UK), which quickly became the dominant variant in Sweden during the late winter, while the red line shows the Delta variant, which currently makes up only a small proportion of cases but is on the rise.

Which regions are worst affected?

Across Sweden, most regions are still seeing a steady downward trend in newly reported cases, but Värmland is “the region which sticks out”, state epidemiologist Anders Tegnell said in Thursday’s Covid-19 briefing.

The 14-day incidence rate of newly reported cases per 100,000 residents is at 325 as of the end of last week (compared to 130 nationwide), and the rise is linked to an outbreak of the Delta variant.

“What happens in the next week will be decisive, whether we can stop this spread with the very comprehensive contact tracing that is now in place, or if we see further spread in Värmland,” said Tegnell.

Blekinge and Kronoberg have also reported outbreaks of the variant, although their total number of new Covid-19 cases is still dropping.

According to Tegnell, the outbreaks in Värmland have been primarily linked to schools while in Kronoberg it is linked to a university and in particular its graduation ceremony. The outbreak in Kronoberg has been linked to Linnèuniversitetet in Växjö, pictured. Photo: Fredrik Sandberg/TT

Do the vaccines protect against the variant?

This is the big question, and one that experts in several countries are looking into now. Data published in medical journal The Lancet found that protection against infection two weeks after a second dose of the Pfizer or AstraZeneca vaccine was lower for the Delta variant than for the Alpha variant.

The vaccines still offer significant protection against the more serious consequences of illness, the latest data from the UK shows. An analysis by Public Health England this week found that the Pfizer vaccine was 96 percent effective against hospitalisation from the Delta variant after two doses, while AstraZeneca’s offered 92 protection.

But current research indicates that a single dose of either of the two main vaccines gives a much lower level of protection against the variant. Four weeks after one dose, Public Health England found that both the Pfizer and AstraZeneca vaccines, around 50 percent protection was offered against the Alpha variant, but for the Delta variant one dose of the Pfizer jab gave about 36 percent protection against symptomatic illness, compared to around 30 percent for the AstraZeneca jab.

As for what exactly those numbers mean, if a vaccine is 50 percent effective against symptomatic illness, it means a vaccinated person has a 50 percent lower risk of hospitalisation. So for every 100 people who would have been symptomatic if they were unvaccinated, on average you would expect only half of them to fall ill if they have received the vaccine.

What is Sweden doing to curb the spread of the Delta variant?

On a national level, there has been no major adaptation of Sweden’s Covid-19 measures for the public yet.

This week, Sweden’s general recommendations, which include for example the requirement to work from home if possible and limit social contacts only to your nearest circle, were extended from June 30th to at least September 30th, with the risk of variants named as one reason not to relax them.

But individual regions and municipalities have taken action in response to local outbreaks, as has been the case throughout the pandemic.

For example, after an outbreak of the Delta variant in Sölvesborg, Blekinge, municipalities temporarily closed activities where the infection had been discovered, including a school, a preschool, a grocery store and a football club.

The Värmland region also tightened its recommendations to the public as a result of the variant’s spread, mainly relating to sports and leisure activities for young people with organisers asked to cancel tournaments, matches and cups. People who have received only one vaccine dose will also no longer be left out of contact tracing efforts in the region.

And in Västerbotten, tighter recommendations mean household contacts of someone who tests positive for Covid-19 must isolate even if they have received one vaccine dose. This is because of the slightly lower protection against the Delta variant from a single dose according to the available data.

Back on a national level, Tegnell said there had been a sharpening of how identified cases of Covid-19 are being handled, with an increase in the proportion of test results being sequenced. This will help authorities have a better understanding of the spread of the variant with the aim of introducing infection prevention measures before the outbreaks spread too significantly.

What does it mean for Sweden’s re-opening plan?

It’s too soon to say. The next stage of Sweden’s five step relaxation of Covid-19 restrictions is expected to happen on July 1st, with increased numbers allowed at different kinds of public events.

In the UK, where the Delta variant now makes up 90 percent of all Covid-19 infections, a planned re-opening was delayed by four weeks to give healthcare services time to vaccinate more people.