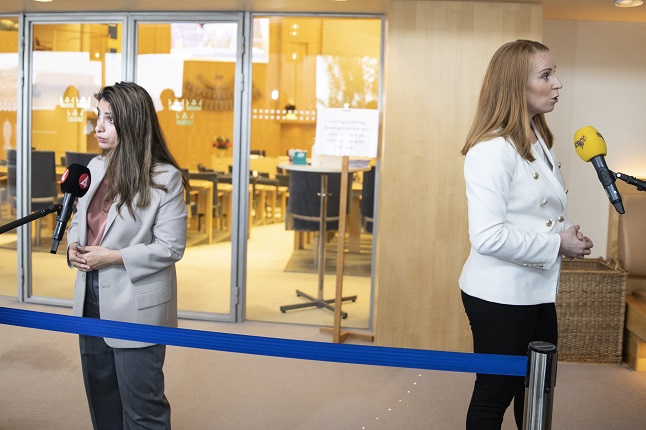 First, Social Democrat leader Stefan Löfven has a choice: call for snap elections, or resign, sparking a round of talks aimed at forming a new government.

He has seven days to make this decision and in a press conference on Monday said he would first try to form a new government.

Uppsala University researcher Johan Hellström, who specialises in political parties in Sweden, said he thinks snap elections are unlikely due to the risk that they would see the conservative bloc pick up the few extra votes they need to form their own majority.

“First and foremost, I think Löfven will try to find support for a new government and to open for the speaker to start a new talmansrunda. Today, there is really only one option unless The Centre Party changes sides which is quite unlikely. And that is a red/green-Centre majority,” Hellström told The Local.

For a government to be able to form in Sweden, it needs a majority of MPs (at least 175) to either vote in favour of it, or abstain from the vote. Currently, the ruling Social Democrat-Green government count 116 MPs, needing another 59 in order to reach the majority.

At the moment, that support comes from the Centre and Liberal parties in exchange for influence on certain policy decisions (including the issue of market rents which sparked the current crisis) and from the Left Party (which is strongly against some of the policies the government has agreed to, but still prefers a centre-left government to a conservative one).

The Liberal Party has already said it wants a conservative government, so Löfven cannot count on their support. The Left and Centre Party together would contribute 58 votes, meaning that if one of Sweden's two independent MPs also agreed to support Löfven, he could return as PM. That's likely, since one of the two independents, former Left Party MP Amineh Kakabaveh, voted against her former party to support Löfven in Monday's no-confidence vote, giving a speech to say she did not want to vote with the Sweden Democrats.

One of the key reasons for this is the growing influence of the Sweden Democrats. Long shut out of politics as the other parties refused to collaborate with them, this caused problems in 2018 as their rise left both the traditional blocs without a majority -- leading to the January Deal between the government and its former centre-right opposition, which created friction with the Left Party.

Since that election, the Moderates, Christian Democrats and most recently the Liberal Party have opened the door to wider cooperation with the Sweden Democrats.

The Centre Party has refused to be part of a government propped up by the Sweden Democrats, but it has also refused to co-operate directly with the Left Party, putting the centre-left parties in a tough position. The gap between these two parties is what caused the vote of no confidence, and it's the main stumbling block for Löfven as he works to secure a majority now.

On Monday, Löfven would not comment on the Centre and Left Parties working together, saying, "those are two parties that must have their own relationship".

If it is not possible for either Löfven’s Social Democrats or the Moderate Party to form a government, there will be no other option than to have a fresh election.

This would need to happen no more than three months after it is announced, and even if it goes ahead, the scheduled September 2022 election would still take place just one year later.

But it's not in any party's best interest, most commentators believe. Both the Liberal and Green parties are close to falling below the four percent threshold needed to enter parliament, according to recent polls, as the Liberals' move closer to the Sweden Democrats has met with criticism both from voters and within the party.

Jonas Hinnfors, professor of political science at the University of Gothenburg, told the TT newswire that a snap election could see the Liberals pick up votes from the Moderate Party to stay in parliament, which could make the Sweden Democrats the largest party on the right.

"It is important for the balance in future government documents that the Moderates will not be smaller than the Sweden Democrats. I think the Moderates would find that very troublesome," he said.

For the right-of-centre bloc, he argued, it would be more beneficial to have more time to prepare before voters next go to the polls, meaning a September 2021 election is in no party's best interest. The only question is whether another alternative turns out to be feasible.

By Catherine Edwards and Isabella Anderson