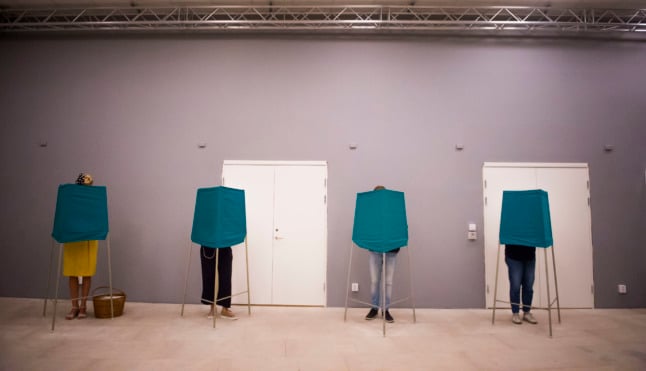 It's not yet clear if Sweden will have a snap election but if it does, this is the process. . Photo: Hanna Franzén/TT

Monday, June 28th is the deadline for prime minister Stefan Löfven to either resign, sparking a round of talks between party leaders to form a new government, or to announce a snap election.

When would it happen?

A snap election must be held within three months after the Prime Minister’s announcement, which means it would take place no later than September 28th, 2021, if Löfven chooses this option. Holding it much earlier than that is unlikely.

“On the whole, that is the time it takes to complete the entire process that needs be done. It is not possible to shorten the timeframe much with our current ballot system,” the head of the Swedish Electoral Authority, Anna Nyqvist, told the TT newswire.

In Sweden, elections take place on a Sunday in order to maximise voter turnout, which in this case means September 26th is the latest possible election date.

The week before, on September 19th, another election is already set to take place: the Swedish Church elections where all members of the Church aged 16 and older are able to vote.

But the two cannot be combined due to rules that state elections must be carried out in a way that’s neutral (värdeneutral in Swedish), which means they cannot be combined with the religious vote. There is also the question of competing for premises and personnel.

At a snap election, by and large the same rules apply as for a general election, but a few things differ. For example, the time period for voting from abroad and advance voting is shorter.

The political parties are currently in, or have undergone, a nomination process, choosing which candidates they want on the ballot paper in next year’s planned parliamentary election.

Thirty days after a snap election is called the lists have to be submitted to the electoral authority to allow for the ballot papers to be printed.

“A snap election is an entirely new election. Parties submit new lists that are relevant for that election and are applicable for the entire mandate period until next year,” Anna Nyqvist says.

To vote in parliamentary elections, you must be a Swedish citizen and aged over 18 on the day of the election. Swedes living abroad can vote by post.

However, a snap parliamentary election does not mean that regional and municipal snap elections take place too. Instead there will only be one vote, and only Swedish citizens may take part.

In the weeks leading up to the election, voting cards are sent out to all eligible voters from the Election Authority, also known as Valmyndigheten. These are sent to the address you are registered at with Skatteverket, so it’s important to make sure your personal details are up to date, though you do not need this card to vote.

This letter will also include information about the location and opening time of your nearest polling station on election day. These are municipal buildings, usually schools or libraries. In some locations, it’s possible to cast your vote in advance, starting ten days before the day of the election; if you do this, you can use any advance polling station, but if you vote on the day, you must go to your designated location.

Usually, polling booths have different ballot papers for each of the elections taking place: yellow papers are for the parliamentary elections. In a normal election, these would be accompanied by white papers for municipal elections and blue for regional elections.

You can either vote either for a particular party (without identifying a specific candidate), to choose from a list of candidates, or to vote using a blank ballot paper. On blank ballot papers, you can write down any party and candidate. In theory, it’s possible to write anyone’s name, and if that person got a large enough proportion of votes, they would be elected.

How are the winners chosen?

Like most of Europe, Sweden uses a system of proportional representation, which means the number of seats a party wins largely reflects the share of the vote it gets nationwide.

Sweden is divided into 29 constituencies for parliamentary elections (roughly one for each of the 21 counties, with the larger counties of  Stockholm, Skåne, and Västra Götaland divided up further), each of which has between two and 43 seats depending on their population. Fixed constituency seats make up 310 of parliament’s 349 seats, with the remaining 39 distributed so that each party’s proportion of seats matches up to their proportion of the national vote as closely as possible.

If one single party gains more than 50 percent of the vote, its leader becomes prime minister, but this is very rare in Sweden. That’s particularly true this year given the fractured state of Swedish politics; a recent party sympathy survey by DN/Ipsos shows no political party polling above 25 percent.

Usually, the party that wins the largest number of seats will try to form a government by building a coalition with other parties that hold similar stances.