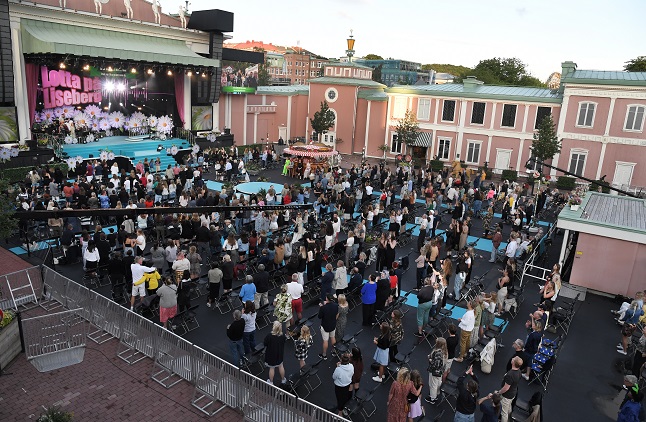 Under the next stage of its Covid-19 plan, Sweden would see more attendees allowed at some public events. Photo: Tommy Holl/TT

Sweden’s rate of newly reported infections per 100,000 residents over the past two weeks has fallen to 60, the lowest level in quite some time, state epidemiologist Anders Tegnell said in Thursday’s coronavirus briefing.

The rate of new deaths had been at a plateau for several weeks, with two competing forces as the rollout of vaccines protected the most vulnerable, but the infection continued to spread and lead to illness. But now, even the number of Covid-related deaths is falling and approaching the low levels of last summer.

However, the delta variant of the virus, which research shows is more contagious, is increasingly prominent, with 663 confirmed cases reported to date and known cases in all regions.

Tegnell said that the dominance of the delta variant itself will not effect Sweden’s re-opening plan.

“It is not the delta variant that affects the decision, but whether we get an increased spread again. Whether it is due to delta, alpha or a new variant is not important. The important thing is what the spread of infection and the burden on healthcare looks like,” the epidemiologist explained to media at the briefing.

He added that the most significant variable was whether the public follow the existing recommendations, for example limiting social contacts, working from home if possible, and staying at home if experiencing symptoms.

He said his overall impression of how well these were followed, based on reports from regions, was “mixed”, but added: “We see no clear signals that the majority do not follow the restrictions. Fortunately, it is a season where people spend more time outdoors.”

Sweden’s plan to ease its Covid-19 restrictions over the coming months is based on a range of criteria, including the burden on healthcare, vaccination roll-out, and number of people in intensive care with the virus.

The changes currently planned for July 1st include increasing the number of people allowed at different kinds of events, further extending opening hours for restaurants and bars, and removing advice for people to only meet people within their closest circle outdoors (it would still apply indoors). But whether any or all of these go ahead will depend on the agency’s assessment of the Covid-19 situation.

The criteria set out by the Public Health Agency for these changes to happen include: fewer than 300 people needing hospital care due to Covid-19,  fewer than 70 requiring intensive care for Covid-19; infection rates below 200 new cases per 100,000 residents over the preceding two weeks and steadily declining for at least two weeks; and at least 50 percent of the adult population vaccinated with at least one dose.

“For most of these variables, we have begun to approach the numbers we have set, but it is an overall assessment that applies. It is important to include other factors. Not least that it should be a stable development, so that we do not get any quick setbacks,” Tegnell said on Thursday.

The Public Health Agency will make an assessment and is expected to provide information on whether the relaxation can go ahead as planned after the Midsummer weekend.

Even though the figures show that the Covid-19 situation has improved in recent weeks, the authorities stressed that it is still causing a burden for Sweden’s healthcare workers and that the pandemic is far from over.

“Despite the decline [in numbers of Covid-19 patients], healthcare is heavily burdened, especially in intensive care. The number of open ICU places is higher than what is normal for this time of year. Given that we are in a holiday period, the situation is problematic,” warned Tomas Lindén of the National Board of Health and Welfare at the same press briefing.