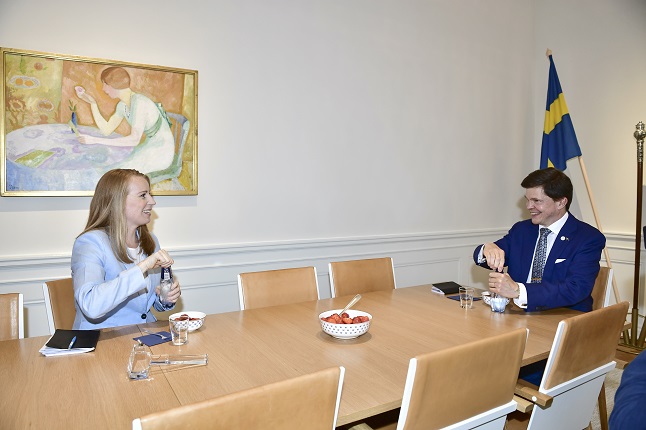 The government failed a vote of no confidence which brought together the Left Party (which was strongly against proposals to change Swedish rental laws, which the government had agreed with its former conservative opposition rivals) and the right-of-centre parties (which mostly support the rental law in question but seized the chance to topple the left-of-centre government).

That meant Prime Minister Stefan Löfven had a week to decide whether to call snap elections or resign, and on Monday he announced he had opted for the latter.

And what happens now?

On Tuesday, all the party leaders met individually with parliamentary speaker Andreas Norlén, the first talmansrunda (‘speaker round’) aimed at finding out where each party stands, to decide on whether a candidate can be nominated as prime minister who would have a good chance of passing a parliamentary vote.

There is no time limit on how long this can take, and the current fractured state of Swedish politics means it could take a while for a compromise to be reached. The process ends either when a prime ministerial candidate is found who has the backing of a parliamentary majority, or when candidates have been proposed four times and all failed the vote, at which point a snap election would have to be called.

So who’s running the country?

Stefan Löfven continues as prime minister, but of a transition government. This means the government cannot make major decisions until there’s a resolution in the form of a new prime ministerial nominee.

How many seats does each party have?

Sweden’s 349 seats or mandates are currently divided as follows.

That adds up to 347, because there are also two independent MPs without a party affiliation. One of them is a former Liberal Party member, and the other a former Left Party member (though it’s worth noting that she voted against her former party, in favour of Löfven’s government, in the vote of no confidence).

What needs to happen for a new prime minister to be chosen?

They need to be formally proposed as a PM candidate by the parliamentary speaker, which will usually only happen if the speaker thinks they have a good chance of getting a parliamentary majority.

Then, parliament will take a vote on installing the candidate as prime minister. MPs have three choices: they can vote green (in favour), red (against) or yellow (abstention). Importantly, the decisive factor in Sweden is that a candidate needs a majority to not vote against them in order to pass the vote. In other words, abstention is a kind of support, often called ‘passive support’.

What are the different options for a government?

One option is the return of a Social Democrat-Green government, which would rely on support from the Centre and Left Parties at a minimum to reach the required majority.

On the right of the political spectrum, a Moderate-Christian Democrat government could become a reality, possibly including the Liberal Party. With the support of the Liberal Party and the Sweden Democrats, they would be one vote short, but could take power with the support of just one or more other MPs going against the party line, and one Centre Party MP did just that in 2018.

Another option is a centrist coalition, the preferred option of Centre Party leader Annie Lööf, which could see her party unite others from both sides of the coalition. The biggest obstacle to this reality is the reluctance of the Social Democrats and Moderates to work together.

Why didn’t we get a snap election?

Well, Sweden could still go to the polls if no government can be formed during the rounds of talks.

Stefan Löfven said he opted against a snap election because this wasn’t “in the country’s best interest” amidst an ongoing pandemic, since it would cause several months of political uncertainty.

There’s also the pragmatic explanation that most parties would not benefit from an election right now. It costs money to campaign; they’d have less time than they bargained for to work on their strategy; and two parties (the Greens and Liberals) currently look at risk of falling below the number of votes needed to enter parliament. To cap it all off, whoever won a snap election would only be in power for a year, because the general election scheduled for September 2022 would go ahead anyway.

What does the crisis mean for me as a Swedish resident?

It all depends on the outcome. As of now, the economy and the value of the kronor hasn’t been particularly swayed one way or the other by the crisis, so there’s been little change in your purchasing power.

But the make-up of any new government will of course affect which laws and reforms are pushed through in the next year. For example, the Moderates have vowed to pursue a stricter immigration policy if they get into power, while the Centre Party want tax cuts for low- and middle-income earners and on investment savings accounts (ISKs), and the Social Democrats are hoping to pass a law that would give parents of young children an extra week of annual leave.

So although a lot of the debate may be about internal party rifts and fractures, it’s important to remember that there are real issues at stake too, which could have an impact on your life in Sweden.