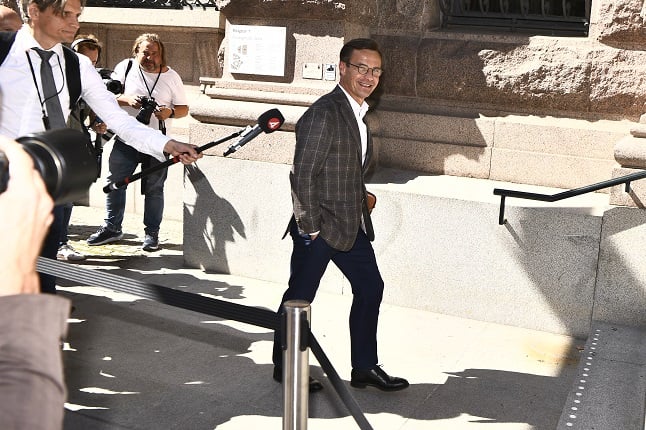 Moderate Party leader Ulf Kristersson on his way to talks with the speaker earlier on Tuesday. Photo: Claudio Bresciani/TT

Kristersson, whose party falls on the right of the political spectrum, has been named as sonderingsperson.This means he has the task of speaking to other party leaders to see if he is able to get enough support for a government, either through forming a coalition or by opposition parties agreeing to tolerate, or not vote against, the proposed government.

Norlén said he would give Kristersson three days for this task, reporting back to the speaker on Friday, but at this stage it would be possible to request an extension if needed.

Asked why he chose the Moderate leader, the speaker said: “He is the leader of the largest party in the group which voted against Stefan Löfven. It is reasonable that he gets a chance to see which opportunities he has to form a government.”

He added: “There were more [party leaders] who pointed to Kristersson than to any other form of government. I thought this was a good reason for making the decision.”

Norlén emphasised his aim of keeping the process as swift as possible, saying that he plans to have one vote on a prime ministerial candidate every week until the process is completed.

Only four such votes can take place before a snap election can be called, which means that by the end of July, Sweden should either have a new government in place or have announced a snap election if this timetable is kept to. This is a far cry from the four-month process of talks between the parties and the speaker that took place after the September 2018 election before a new government could be formed.

The seats in parliament are divided the same way they were after that election, but the political landscape has changed nonetheless.

The Liberal Party, which along with the Centre Party agreed to support Löfven’s government in exchange for some policy influence, have now switched sides and said they will pursue a right-wing government led by Kristersson. And the reason the vote of no confidence against Löfven was passed was because the Left Party said it could not support one of the proposals pushed through by the Centre Party.

Even with the support of the Liberals along with the Christian Democrats and far-right Sweden Democrats, the Moderates would be one vote short of obtaining a parliamentary majority, leaving them to rely on votes from MPs in the Centre Party, whose leader has ruled out supporting a government that relies on the Sweden Democrats.

If Kristersson is not successful in forming a government backed by a majority of parliamentarians, another round of talks with the speaker will begin and Norlén will name a new sonderingsperson.