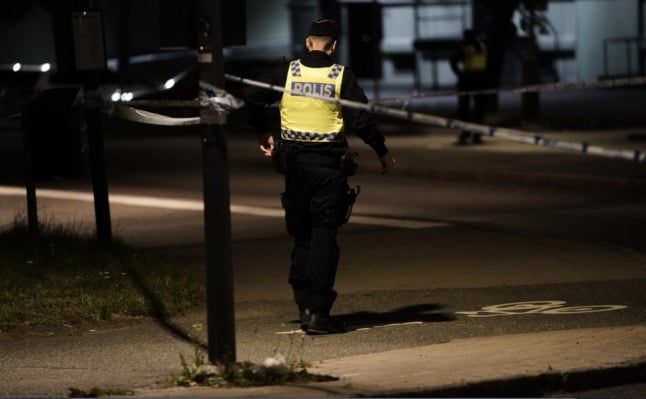 The police have begun a major operation in Biskopsgården after a police officer was fatally shot. Photo: Björn Larsson Rosvall / TT

The police chief for Gothenburg, Erik Nord, has told SVT, “The most likely thing now is that the shooting was not aimed at the police.”

The police say that an intensive investigation is now underway to be to find and arrest the suspect. They are interrogating witnesses and reviewing surveillance film, as well as door knocking.

According to reports, the police officer was talking to a couple of people when he was shot. He had been in the Biskopsgården area on a moped together with a colleague. He died later of his injuries.

Police rushed to the scene with several patrols at 10.30pm on Wednesday night after reports from people who had heard gunshots in the area.

At a press conference on Thursday morning, police said they were not able to share any information about the suspected perpetrator or motive for the shooting, nor whether there was any suspected connection to criminal gangs.

“This is a terribly tragic event and it was a terrible and sad message to receive. My thoughts go above all to his relatives but also to all colleagues,” said Klas Johansson, the regional police chief in the West, in a statement.

The officer who was killed was described as in his early 30s and relatively new to the profession.

The National Police Chief, Anders Thornberg, said: “It is with great sadness that we have received the news that a colleague has died after being shot during the evening. Our thoughts go to the family, loved ones and colleagues. I have spoken to the regional police chief and parts of the other police management in region West to ensure that they have the resources required to be able to prosecute the culprit. The police profession is associated with risks and we must continue the work of minimising those risks with great determination.”

The Gothenburg police chief, Erik Nord, said, “One must be careful not to draw too far-reaching conclusions. But it could be that the policeman was shot because he was in the wrong place at the wrong time. But it is not possible to answer for real before we go further into the investigation.”