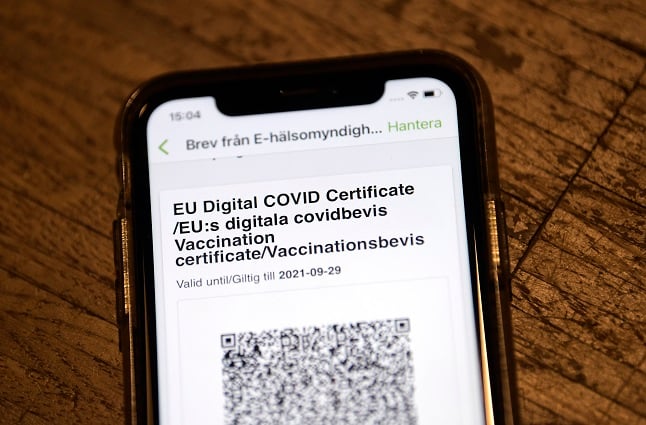 The vaccine pass should be available to everyone who received at least one dose of a Covid-19 vaccine in Sweden. Photo: Janerik Henriksson/TT

On July 1st, a press spokesperson for the eHealth Agency told The Local by email: “We’re still working on how people with samordningsnummer and reservnummer can get their COVID certificates. As of now, you need a personal identity number (personnummer).”

Although it is possible for people without a digital ID (the main way of applying for the pass) to apply by sending a form via post, this too requires a personnummer.

The numbers are only available to people who can prove they will be in Sweden for at least a year, so as well as new arrivals and people who run into bureaucratic difficulties, many students or people on shorter term work contacts are without the number. Many of these instead have a samordningsnummer (coordination number), while people without either number are given a reservnummer (reserve number) as a temporary substitute when they get their vaccination.

The Local has asked the agency if there is a timeframe for making the passes available to people without a personnummer, and what the current barriers are to it being possible, but on July 5th we were told there were no updates.

Annemieke Ålenius, head of coordination at the eHealth Agency, previously told The Local that it would be possible to apply using a samordningsnummer (coordination number), but only using the paper form.

A press spokesperson for the agency did not have any details to share on why this did not happen as planned.

Also at the June press conference, we asked what applies to people without either number, who are given a reserve number rather than either of the other two, but could not get an immediate clarification. Ålenius said reserve numbers are given out on a regional level and are not part of a central system, so this would be examined in future weeks. “We’ll take this question on board and get back to you,” she said.

The issues with the pass follow multiple instances of people lacking a personnummer being initially refused the Covid-19 vaccine, despite being eligible and despite authorities saying it would be freely available to everyone living in Sweden.

Readers of The Local had mixed experiences applying for their vaccine without the number. While some were easily booked in for a vaccine, others were told they were not eligible, or directed in circles between different authorities with each claiming they were unable to make the booking. At least one reader said they would travel back to their home country for their vaccine as a result.