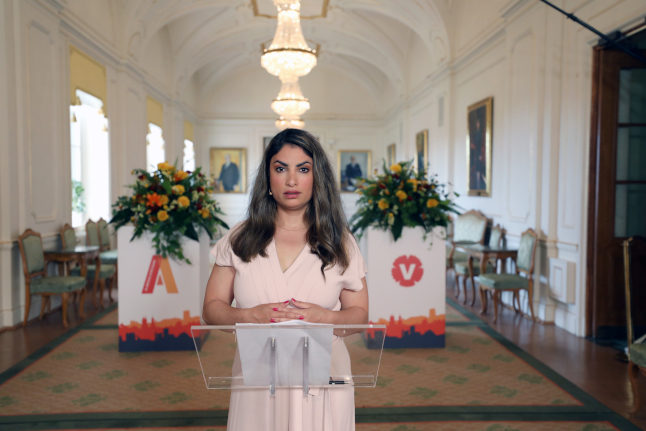 Covid cases on the rise in Umeå

Covid-19 cases are increasing in the northern Västerbotten region, where 59 people were confirmed as having an active infection last week, up from 31 the week before. The virus is mainly spreading in the Umeå area among under-60s, with 49 cases.

“The increase could be due to more people being infected in connection with Midsummer celebrations and that the self-testing facility was closed on Midsummer’s Eve,” continues the Västerbotten region’s statement, which adds that the virus is primarily spreading within families, in workplaces and in other social situations.

Left Party leader Nooshi Dadgostar is rising rapidly in the polls, after her party sparked a government crisis when it refused to accept a series of changes to Sweden’s rental laws. Twenty-nine percent of respondents to a survey by Expressen/Sifo said they had fairly strong or very strong confidence in the new leader, an increase by 11 percentage units since June. Her predecessor Jonas Sjöstedt had a 45 percent rating when he stepped down.

Recently-ousted-and-possibly-soon-returning Prime Minister Stefan Löfven tops the ranking with 38 percent (up two percent). Centre Party leader Annie Lööf took the hardest hit in the poll with a decrease of 6 percentage units sending her to 26 percent, although the two Green Party leaders and the Liberal leader find themselves at the bottom with only 10-11 respondents saying they have strong confidence in them.

Sweden's political landscape was redrawn after the last election, and since then some key players have been replaced and allegiances shifted. Here's a look at who's who, and what they stand for. https://t.co/DvUHJSVmLr

Although it is possible for people without a digital ID (the main way of applying for the pass) to apply by sending a form via post, this too requires a personnummer.

This is despite an eHealth Agency official telling The Local in June that it would be possible for people with a coordination number (which is handed out to people without a personnummer) to apply using the paper form from July 1st.

On July 1st, a press spokesperson for the eHealth Agency told The Local by email that they were still working out how to offer Covid certificates to people without a personnummer. On July 5th, we were told there were not yet any updates.

I was told at a press conference in June that people without a personnummer but with a samordningsnummer would be able to apply for the Covid certificate from July 1st using the paper form. But this hasn't yet been made possible, and we've been given no timeframe or explanation. https://t.co/feXBSoFxOG

Why Stefan Löfven could soon return as prime minister

Acting Prime Minister Stefan Löfven, who was ousted last month in a historic no-confidence vote, will get a new chance at convincing the Swedish parliament to accept his government.

The speaker of parliament, Andreas Norlén, told a press conference on Monday that he would nominate Social Democrat leader Löfven as prime minister, after opposition rival Ulf Kristersson of the Moderate Party last week failed in his attempts to form a new government.

This means parliament on Wednesday will vote on whether or not to reinstate Löfven as prime minister. If successful, the centre-left leader would then be able to step back into the role on Friday.

We will discuss the political situation further in The Local’s Sweden in Focus podcast on Saturday.