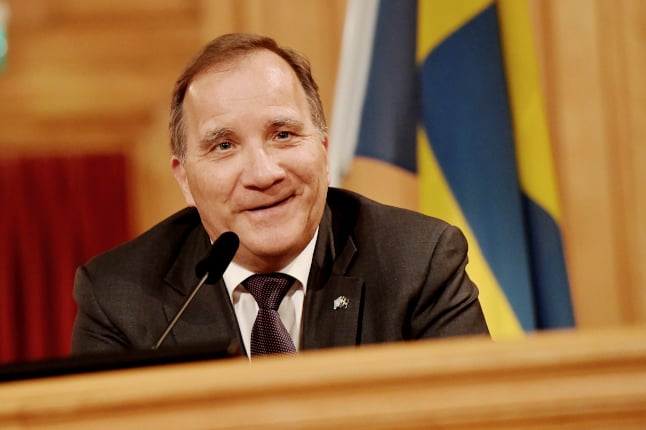 Will Stefan Löfven be voted back in as prime minister today? Photo: Stefan Jerrevång/TT

Swedish Prime Minister Stefan Löfven was on Wednesday voted back into office in a parliamentary vote, after the government was brought down by a no-confidence motion two weeks ago.

He passed the parliamentary vote on Wednesday with 176 members of parliament either voting in favour of his return to office or abstaining from the vote.

“Parliament has put its trust in me to continue leading in Sweden. I take on this task with determination and respect,” the returning PM told media at a press conference.

The system required a majority (at least 175) to not vote against him, rather than needing a majority of ‘yes’ votes; in other words, abstentions effectively worked as votes in favour.

Should over-12s get prioritised for the Covid vaccine in Sweden?

In parallel with the ongoing Covid-19 vaccinations, Sweden should start administering the vaccines to children over the age of 12, to avoid the risk of large outbreaks of the Delta variants in Sweden when schools start in autumn, argue six researchers in an opinion piece published by the DN newspaper today.

Sweden currently recommends the vaccine only to over-16s (starting with older people, so which age groups are currently being vaccinated depends on how far their region has got) and the Public Health Agency said it sees no need to change that, for now.

Including children in the current programme would “mean that we will have large groups in their 20s and 30s who are unvaccinated, and I would argue that this is much more dangerous in terms of community spread than having unvaccinated children in school”, Sweden’s state epidemiologist Anders Tegnell told the TT news agency.

More than 5 million people in Sweden have received at least their first dose of a Covid-19 vaccine, the latest update from the Public Health Agency showed on Tuesday.

In total, 5,302,083 people have received one or both doses, based on what regions have reported to the National Vaccine Register.

The southern region of Skåne has now opened Covid-19 vaccination slots to everyone aged over 18 in the region. Please note that you have to have turned 18 to be able to book; 17-year-olds who will turn 18 later this year are not yet eligible.

If you have a digital ID such as BankID, you can log in via 1177.se and book a time at your doctor’s office directly. You can also check the region’s website which lists available times at all vaccination centres.

If you do not have a digital ID or have difficulties booking online, you can call your doctor’s office directly to book over the phone.