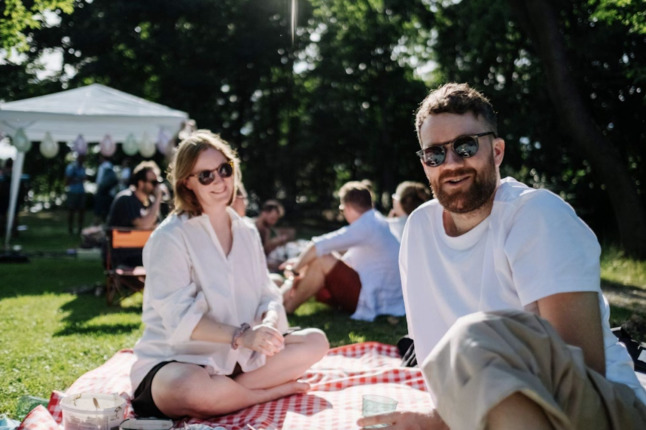 Miles Robinson and his partner, Alena Sucher, are expecting twin girls at the end of August.

“This is the biggest thing that’s happened in my life,” Miles said. “It sucks that there’s no light at the end of the tunnel in terms of knowing when I can visit Australia or have my mum to visit.”

He moved to Sweden nine years ago from Bacchus Marsh, a small town near Melbourne, Australia. His mother and sister still live there.

As an Australian citizen he is now “required to demonstrate that [he has] a compelling reason for needing to leave Australian territory”, if he was to go back, under the new amendment.

Miles said it’s been confusing and strange. “They haven’t really explained it, they just pushed it through silently. I can’t find a reason from them. It’s felt very draconian and harsh.”

In a statement the government has said: “To date, these and other measures have greatly assisted in protecting Australia by preventing and controlling the entry, emergence, establishment and spread of Covid-19.”

Astronomical flight prices, reduced availability (some flights to Australia can only take 30 passengers) and frequent cancellations, as well as the cost of quarantining in a government hotel have been already been preventing many citizens from returning home. This new amendment makes it even harder.

Miles would usually see his family at least once a year, with them travelling to Sweden, him to Australia, or meeting somewhere in the middle. Now it’s going to be at least three years, which is the longest they’ve gone without seeing each other.

“My mum is becoming a grandma for the first time. She’s already sent two packages of stuff she’s knitted for the twins,” he said. “I want my family to share this moment in my life.”

Miles is far from alone though. The ABC reported that globally there are 38,000 Australians registered as wanting to return home from overseas, according to the Department of Foreign Affairs and Trade.

Australia is the only country that currently bans its citizens from leaving the country under an international travel ban which began in March 2020. Any infringements are punishable by a maximum penalty prison for five years or a fine of AUS$66,600 or both.

‘Pleading with your country’

Citizens have to apply for exemptions in order to leave, but these have proved difficult to obtain.

Alfie Tieu’s first application was denied, with no reason given. He’s been living in Sweden since 2017 and working as a copywriter. After reapplying under a different category than work and providing a statutory declaration, his exemption finally got approved and he returned to Stockholm this week after eight months away. This was even before the new and stricter rules were introduced for overseas residents. Alfie Tieu says he understands the Australian government’s approach is to save lives. Photo: Private

“I wasn’t certain my second application would work out. It’s a very weird feeling pleading with your country to let you leave so you can return to your apartment and workplace,” he told The Local.

According to the government’s explanatory statement, the amendment is designed to “reduce the pressure on Australia’s quarantine capacity, reduce the risks posed to the Australian population from Covid-19, and assist in returning vulnerable Australians back home”.

Alfie thinks the government’s strict measures are understandable. “I don’t bear ill will towards the government for having a stern approach overall. It’s picked its strategy – one that has saved countless lives.”

In the statement, the Minister for Health, Greg Hunt, said the amendment is “no more restrictive or intrusive than required in the circumstances”.

But Miles thinks that there’s a pattern with this kind of action from the government.

“We’ve done this before,” he says. “It’s in line with how we’ve treated refugees, keeping them on Nauru Island against their will.”

He said that Australia is increasingly becoming a hermit style fortress island. “There’s a pattern. That’s what makes it scary and dreadful.”

John Dinamarca, who studied law in Australia before moving to Sweden two years ago, said: “If this is done for public health reasons, there should be an aspect related to the vaccine status of people deciding to leave, but there isn’t.”

An Australian legal firm is already considering challenging the amendment on constitutional grounds. In the Swedish constitution, there is an absolute prohibition of deportation or refusal of entry into Sweden of a Swedish citizen, meaning the government would struggle to enact a similar law here.

According to a report in The Conversation, data for approval rates of exemptions do show a significant bias. Approvals from citizens in the UK were 68 percent, whereas for India they were only 46 percent, and in China 59 percent.

Unless revoked sooner, the new amendment is set to be in place as long as the Covid-19 pandemic poses a threat to public health.