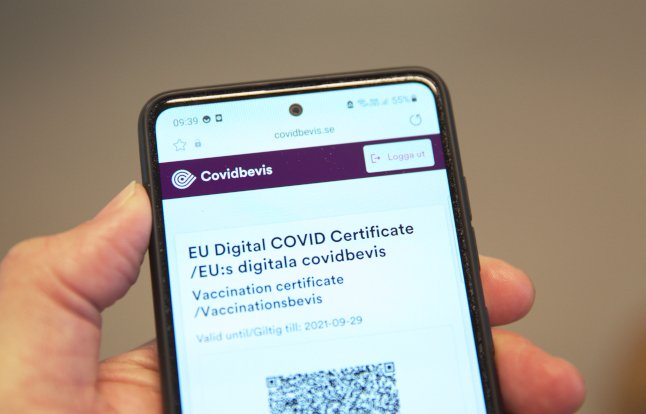 Around 2.5 million Covid vaccine passes have been issued in Sweden since the official covidbevis.se site opened on July 1st, reports public radio broadcaster Sveriges Radio. Some people have applied twice, so it is believed around 2 million people in total have received them.

It is not yet possible to access the passes without a Swedish social security number – personnummer – even if the person is currently staying in Sweden and got vaccinated here. The eHealth Agency told The Local last month that they’re looking into the issue.

People who normally live in Sweden but got both their vaccine doses abroad – or people who have moved to Sweden since their vaccination – are also currently excluded from the scheme. The Local has asked the Swedish government if and when this will change.

Western Sweden to step up Covid testing at airport

The number of new Covid-19 infections is on the increase in the Västra Götaland region for the third consecutive week, and more than a third is believed to have been infected in connection with foreign travel, reports Sveriges Radio.

The region therefore wants to expand Covid testing opening hours at the Landvetter airport, where testing is currently being offered between 8am and 11pm. Everyone who travels into Sweden from outside the Nordic region and has not been fully vaccinated is strongly urged to get tested on arrival, and get another test five days later (people who had to show a test to enter the country are exempt from the test on the first day).

More people than ever have been calling Sweden’s emergency number 112 this summer. Operators SOS Alarm report that they normally receive around 9,000 calls a day, but this summer the number has stood at around 14,000 calls a day. In July 2021, the previous record month of July 2020 was beaten by 10 percent more calls.

Around a third of all calls are not emergencies and should have been directed at 1177 (for non-urgent healthcare queries) or 114 14 (to report non-urgent crimes to the police). If you do have an emergency, however, you should always call 112. SOS Alarm also told the TT news agency that if you dial the number by accident and hang up, you should pick up when they call you back, so that they know it is not an emergency.

Meteor shower to light up the Swedish night sky

As the earth passes through the trail of the remains of a comet, the burning of meteorites in the atmosphere will result in a sparkling display in the night sky over Sweden. The phenomenon is known as the Perseids and occurs in August every year.

This year, it will start at around August 10th and peak between Wednesday and Friday, according to Swedish news agency TT. The Tycho Brahe observatory in Malmö will stay open to the public from 9pm until around midnight or later on those days.