Sweden isn't as normal as it seems. Photo: Anna Hållams/imagebank.sweden.se

1. Sweden used to have a state-owned hamburger chain

As if a state-owned alcohol emporium wasn’t enough, in the 70s, the Swedish state decided it wanted to compete with McDonalds for dominance in the fast-food realm.

They opened Clock, a chain which managed to compete well enough with the American giants during the 1970s and 80s. There were even franchise branches in Norway, Finland, and perhaps more incredibly, Japan and Kuwait.

But it didn’t last. The last branch of Clock closed in 1999.

There have been various attempts to re-launch the burger chain in some form since its demise, but none have gone anywhere. Yet.

2. North Korea owes Sweden millions for Volvos from the 1970s

It seems that a lot of weird things happened in Sweden in the 70s. It’s also a decade when the Swedish government saw potential in trading with North Korea, 20 years after one of the most destructive conflicts in modern times.

Companies like Volvo were encouraged to court it as a new export market and in 1974, Volvo received an order for 1,000 of its 144 model and promptly started shipping the cars out to North Korea. But it very quickly became apparent that Pyongyang was not paying for the goods that had been shipped.

In fact, they never did, and the debts have stood ever since.

The debt now amounts to just over SEK 2.719 billion (US$302 million), Carina Kampe from Sweden’s National Export Credits Guarantee Board told The Local in 2017.

Apparently, “people have even claimed to have seen the cars driving in North Korea nowadays, even though the last ones were sent in the 1970s”, she said.

3. The pacemaker was invented in Stockholm

The first person to ever keep a human heart beating with a machine was a Swede.

In 1958, Åke Senning, a thoracic surgeon at the Karolinska Hospital in Stockholm, implanted a device to keep a 40-year-old patient’s heart beating. Senning and his associate, Rune Elmqvist, an engineer, had developed and tested this pacemaker between 1956 and 1958.

The patient survived after receiving another pacemaker in 1960 (the first one only lasted six weeks), and was still living when an academic article about pacemakers was written in 1998, 26 pacemakers later.

In a remote part of Kullaberg Nature Reserve in Southern Sweden, on one square kilometre of land covered in sculptures and art, lies the Royal Republic of Ladonia.

Ladonia has its own time zone (three minutes behind Sweden’s), its own ministries (of Folktales, Postcards, and Procrastination) and two national anthems (one is the sound of a rock being thrown into water). There are even national holidays (September 23rd is the Day of Beer Drinking).

Over 22,000 people have citizenship, which can be applied for online, while over 1,000 have paid to become members of its nobility.

Ladonia’s long term goal is to expand its territorial holdings so that its citizens can live there. Otherwise, it’s open to visitors who walk the 2.5 kilometres to get there.

With one of the oldest monarchies in the world, Sweden’s royal history is full of weird stories. But perhaps none are stranger than the life of Eric of Pomerania.

Once king of Denmark, Norway, and Sweden at the same time, he was deposed in a coup d’etat in 1439 and fled to Gotland. He then became the leader of a group of pirates (the so-called Vitalienbrüder) who terrorised merchant vessels on the Baltic Sea for ten years, while he tried (and failed) to reclaim the throne.

He is, apparently, the fourth most popular pirate on Wikipedia. Once King of three countries, Eric of Pomerania (1382-1459) funded himself through piracy. Image: Nationalmuseum

6. The king who banned coffee

In 1746, King Gustav III issued a royal edict against the consumption of both tea and coffee. Anyone who drank them would have to pay heavy taxes or face having their kitchenware confiscated. Coffee was later banned completely, although people continued to drink it and the coffee bootlegging trade flourished.

King Gustav was so convinced of the ill effects of coffee that he set out to prove the dangers of caffeine through a kind of early clinical trial. He submitted two identical twin prisoners, who had been facing the death penalty, to drink large amounts (three pots) of coffee or tea every day: coffee for one twin, tea for the other.

As it turned out, the coffee-drinker outlasted not only his brother but also the king and the two doctors who had been supervising the “experiment”.

The ban, which was renewed multiple times until the 1820s, was never successful in stamping out coffee-drinking. And now Swedes drink more coffee than almost any other nation in the world.

7. The country that banned dancing

A law banning spontaneous dancing dates back to the 1930s. It states that bars and pubs must have a permit in order for dancing to take place at the establishment. If the rule was breached, the owners of the bar risked fines or having their permits withdrawn.

Due to the coronavirus pandemic, regulations are in place to prevent crowding at events, and once again, we can’t dance with a drink in our hands.

8. The world’s largest scale model of the Solar System is in Sweden

You might not know that the “Globen” arena in Stockholm is the largest spherical building in the world. It also represents the sun in what is the world’s largest scale model of the solar system.

At a scale of 1:20 million, each object is marked with a model or statue in various places across the country. You can find Mercury represented a few kilometres away in Slussen, Södermalm, while Pluto is 300 kilometres away in Delsbo.

The representations are meant to convey a feeling of the enormous distances in space, and how small the planets are compared to the sun. 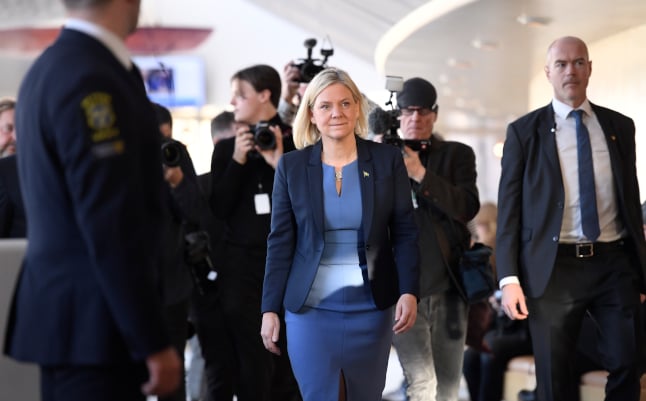 POLITICS
ANALYSIS: How did politics in Sweden get so fiendishly complicated?