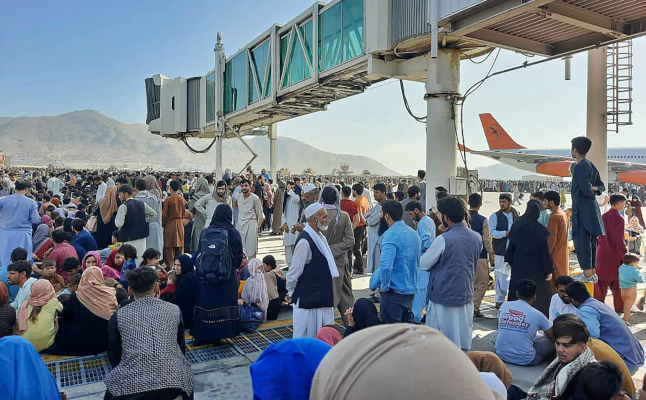 People at Kabul airport, waiting to leave Afghanistan. The Swedish foreign ministry said any Swedish citizens currently in Afghanistan would have to rely on commercial airlines to leave the country. Photo: AFP

National Union of Teachers calls on Sweden to vaccinate over-12s

The National Union of Teachers in Sweden has called on health authorities to let children over the age of 12 get vaccinated against Covid-19. Sweden currently offers the vaccine to all over-16s, and over-12s if they have an underlying medical condition.

“Ahead of the school start we’re seeing an increased spread of infection in society in general and we know it has been difficult, if not impossible, for schools to follow the Public Health Agency’s recommendations to keep a distance,” union chairperson Åsa Fahlén told newswire TT. The autumn semester generally starts in Sweden this week.

Sweden temporarily suspended amortisation of household mortgage loans to help homeowners weather the economic effects of the coronavirus crisis. Amortisation is paying off parts of the loan itself, not just the interest, and it’s worth noting that many experts at the time advised against taking advantage of this unless absolutely necessary.

But the temporary exception will be scrapped as planned on September 1st, so if you’re one of the 270,000 Swedish households who have been putting off paying off your mortgage, you should be prepared for your monthly bill to go up next month.

A travel agency in Malmö is suspected of having given travellers forged documents showing they do not carry the coronavirus, reports regional newspaper Sydsvenskan.

Sydsvenskan reports that the agency based its documents on an original test certificate which was scanned onto a computer, with name and personal ID number swapped out.

Police are investigating, and the agency denies the allegations.

Everyone stationed at the Swedish embassy in Kabul, 19 people, were taken by helicopter and aircraft to a US military base at Doha, Qatar, on Sunday evening. But a group of local employees on Monday wrote a desperate email to the Expressen newspaper complaining that they had been abandoned by their Swedish former colleagues, who had blocked their email addresses and were not answering their calls.

Foreign Minister Ann Linde said the Swedish Armed Forces had provided a list of names of staff they employed in the country before 2014 (they have not directly employed anyone locally in Afghanistan since), and that the foreign ministry was working on evacuation plans for those currently employed by the Swedish embassy in Kabul. She did not want to say how many they are in total, citing security risks.

“I will say when the evacuation is over,” she said.

Do you have family or friends in Afghanistan and would like to share your story with The Local? Email our editorial team at [email protected].