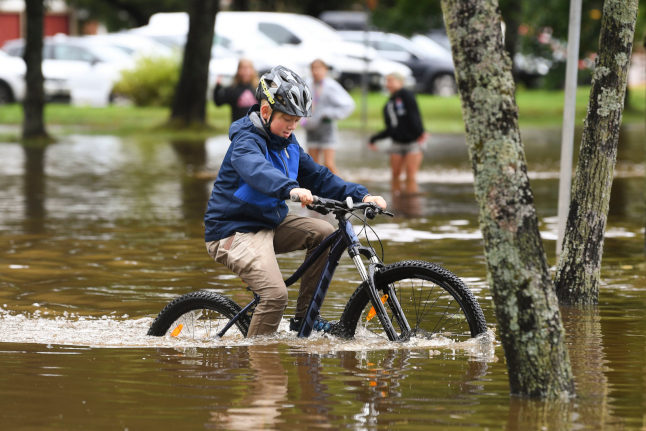 A boy cycling through a flooded city of Gävle on Wednesday. Photo: Fredrik Sandberg/TT

What’s on the cards for Sweden’s mortgage rates?

Swedish state-owned mortgage bank SBAB predicts that the interest rate of a two-year fixed-interest mortgage signed in January 2023 will stand at 1.7 percent. A similar five-year loan will likely have a 2 percent interest rate, compared to 1.5 percent today.

SBAB believes a variable interest rate will rise to 1.6 percent by 2023, an increase of 0.2 percentage points compared to today, it writes in a new report on Thursday.

A variable interest rate usually ends up being less costly over time, but a fixed interest rate gives you the stability of knowing it won’t suddenly rise if overall interest rates go up. It’s also worth taking into account that rates are currently very low, even the fixed-interest ones, but you can also hedge your bets by splitting the two types of mortgage.

You can read more about getting the best deal on your Swedish mortgage HERE.

The flooding in Gävle may not yet have reached its peak, despite Tuesday’s and Wednesday’s downpour subsiding. In Bodås, residents are being urged to boil their drinking water due to a suspected leak in the municipality’s water reservoirs. And three dams are at risk of collapsing near Ockelbo and Ovanåker, reports broadcaster SVT.

In total, 161.6 millimetres of rain fell in Gävle between Tuesday and Wednesday, in what police labelled a “natural disaster”. Some of the flood damages, including landslides and washed-away roads, are expected to take weeks to repair.

Four people contacted the emergency room at Gävle Hospital, after for example slipping when emptying a water-filled basement, but their injuries were not serious, reports SVT. Residents wading through the water in Gävle on Wednesday. Photo: Fredrik Sandberg/TT

Prime Minister Stefan Löfven has told the Dagens Nyheter newspaper that Sweden will not take in as many asylum seekers from Afghanistan as it did during the war in Syria. “Let’s be very clear about one thing: we’re never going back to 2015,” he said.

Around 163,000 people sought asylum in Sweden in 2015, including around 51,000 from Syria and 42,000 from Afghanistan. A report by the Aftonbladet newspaper in 2019 that looked at the asylum applications that had been tried found that only around half were allowed to stay, with 60,500 people granted permanent residency, 24,000 granted temporary residency at the time, and 47,000 people being rejected.

Campaigners have been urging Sweden to halt deportations to Afghanistan for years, and the Migration Agency did so last month. But Löfven said that the government would not offer an amnesty to Afghan asylum seekers currently in Sweden.

A new Delta variant of the coronavirus has been discovered in Uppsala, the first time it has been detected in Sweden, according to regional newspaper Upsala Nya Tidning.

Eight people have caught the Delta variant with the mutation E484Q. Two of the infected people were fully vaccinated but none of them got so ill that they needed to seek hospital care, the TT news agency quotes Upsala Nya Tidning as writing.

They are believed to have caught the infection during travels to Spain and Portugal, and passed it on to at least one person in Sweden. Only around 400 cases of this particular variant have been confirmed around the world but they are likely more, writes TT.