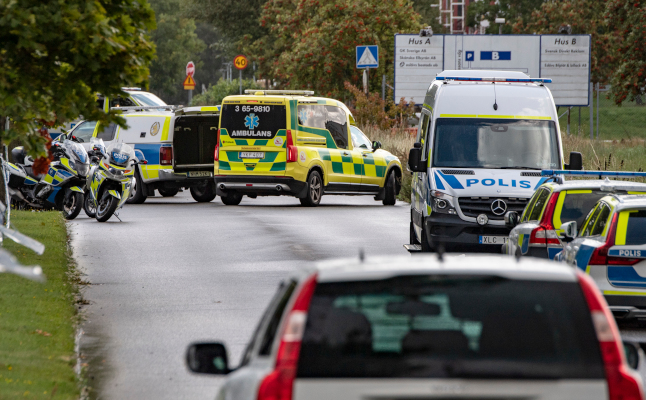 Police outside a school in Eslöv where a 15-year-old was held on suspicion of stabbing a man. Photo: Johan Nilsson/TT

A man who was stabbed by a pupil at a school in Eslöv, southern Sweden, on Thursday is reported to be awake and in stable condition, a local police chief told public broadcaster SVT.

A 15-year-old was held shortly after the attack and is suspected of attempted murder. Citing witness reports from students at the school, Swedish newspapers reported that the boy had been masked, wearing a helmet and a knife. The victim worked at the school.

No one else was injured, but police fired a warning shot in connection with the incident.

The British Embassy is urging Brits to take action to secure their right to stay in Sweden after September 30th, the last day for submitting an application for residence status.

“The window is closing for British citizens in Sweden to apply for residency permits,” said the embassy in a statement, adding that failure to apply by September 30th could “result in a loss of residency rights in Sweden”.

Sweden needs to release more data on the Brits whose post-Brexit residence status applications have been rejected, and have a clear plan in place for those at risk of missing the deadline altogether, writes David Milstead of the Facebook group Brits in… https://t.co/z5qdke3t5A

The Migration Agency is planning to receive 41 Afghans employed by the Swedish Embassy in Afghanistan, as well as their families, from Kabul. Foreign Minister Ann Linde told Ekot that she thought they would be able to fly them out “in a few days”.

But the main challenge is getting the people to the airport in Kabul, as the Taliban control all the roads to the airport. Australians told The Guardian they had been trying for days to get through Taliban checkpoints and had been violently blocked.

A total of 72.7 percent of 16-17-year-olds in the Uppsala region have received their first dose of the Covid-19 vaccine, the highest proportion of the age group in Sweden. The next region is Västernorrland, which has given one dose to 57.2 percent of 16-17-year-olds, and the “worst” region is Västra Götaland with 23.4 percent, reports Aftonbladet.

Not all regions opened their vaccine bookings at the same time, so that is one factor to take into account, but Uppsala (which opened on August 2nd) also attributed its success to the fact that they sent out letters with pre-booked appointments to this age group of teenagers, rather than waiting for them to book an appointment by themselves.