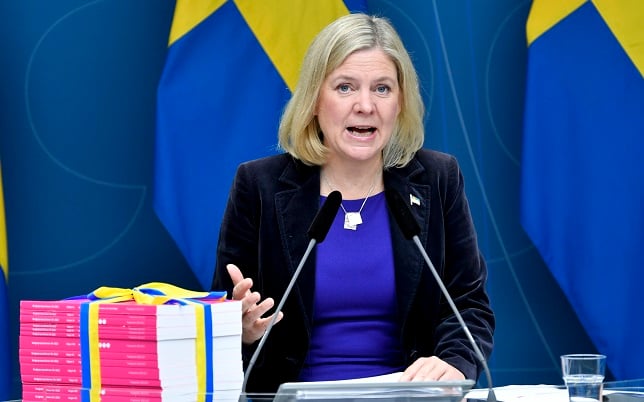 The total amount being spent on new reforms is less than last year’s record-breaking 105 billion kronor, which Andersson described as a “historic” budget at the time, with a focus on coronavirus-related measures.

The pandemic’s impact is also clear from this year’s budget, with a total of 9.6 billion kronor set aside for initiatives linked to the pandemic. That includes 3.5 billion for purchasing more vaccine doses, 2.1 billion to help the healthcare sector carry out vaccinations, and a 2 million kronor boost for testing and contact tracing efforts, for example.

“This is a budget to take Sweden forward after the pandemic,” said Andersson as she announced the measures.

Some of the budget’s content had already been presented over the past few weeks, but there were some new details.

One such measure was the confirmation of the introduction of a so-called ‘family week’, an extra six days of paid leave for parents of children aged between four and 16, set to be introduced from April 2022. This is estimated to cost 3.5 billion kronor.

Another measure announced on Monday was additional investment to support the healthcare sector, including 2 million aimed at reducing queues for treatment as a result of the pandemic and 2 million to increase staff in the sector.

Between 10 and 12 billion kronor goes to climate and environmental initiatives (depending on how these are defined) including public transport, electric buses, and support for Swedish forests. Money will also be invested in fighting crime, with 2.5 billion going to police, technology, and CCTV.

“The climate is and remains the key issue of our time,” said the Finance Minister. “It is extremely clear that we need to do more to reduce our emissions to reach the climate goals we have set.”

The budget also includes 10 billion kronor to cover tax cuts, primarily for low- and middle-income earners, but also for people on sickness and disability benefits and for members of Sweden’s unemployment insurance funds.

The big question now is whether the government will be able to get its budget voted through by parliament.

The Local will publish a full explanation of what the budget bill means for international residents later today.