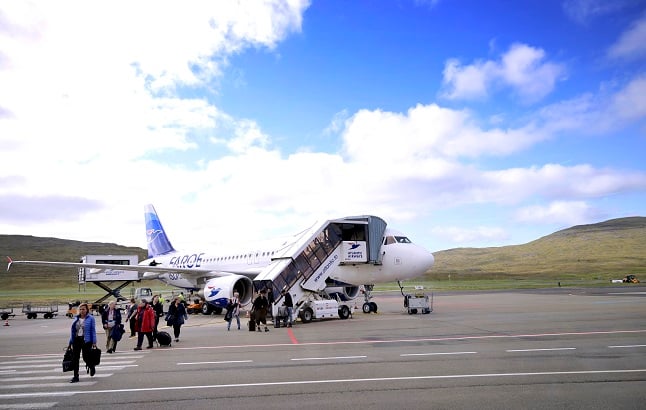 Passengers disembark a plane in the Faroe Islands, one of the countries where vaccinated travellers are now exempt from Sweden's entry ban. Photo: Janerik Henriksson/TT

The rule change means that people who can present a Covid-19 vaccination certificate issued in Albania, Andorra, the Faroe Islands, Israel, Morocco, Monaco or Panama will be exempt from both the ban on entry from most non-EU/EEA countries, and from the requirement to show a negative Covid-19 test on arrival in Sweden. This change will come into effect starting on September 27th.

“This should be seen as a step in a gradual and responsible opening of travel to Sweden for vaccinated people from other countries,” the government said in a statement announcing the rule change.

It comes after the European Commission said that vaccination certificates from these countries could be considered equivalent to those issued within the EU.

Under current Swedish travel rules, entry from most non-EU countries is not permitted unless the traveller falls into one of several exempt categories. Those categories include all Swedish residents and EU citizens, as well as people travelling for urgent family reasons and certain business travel, as well as from a small number of non-EU countries considered as “safe”, for example.

This ban came into force on March 19th, 2020, initially for 30 days but has been extended multiple times since then. It is currently in place until at least October 31st, 2021.

The EU recommends that member states allow vaccinated travellers (at least those who have received a Covid vaccine approved by the European Medicines Agency, EMA) to travel to their countries from outside the EU, but Sweden has so far not followed that principle.

Early in September, the Swedish government said it was “exploring the possibility” of exempting “fully vaccinated residents of certain third countries”, including the UK and US, but offered no indication as to when that might happen.

On Thursday, the government said: “Additional countries, including the United Kingdom, are awaiting a decision from the European Commission in the near future. The intention is to continuously add more countries to the Swedish rules [exempting them from the entry ban and negative test requirement] following Commission decisions. The Government will provide information about this on an ongoing basis.”

“The clear conjunction of a much quicker recovery with a very tight labour market is creating a lot of problems,” Olivier Jankovec, head of the Europe branch of the Airports Council International (ACI), told AFP.

He said there were issues from airports to airlines, ground handlers, police and border controls, but insisted: “The system still works”.

“It’s important for passengers that they communicate with the airlines in terms of when they should get to the airport, and prepare to come earlier than usual to make sure to have the time to go through, especially if they have to check luggage,” he said.

Strikes by low-cost pilots and cabin crew across Europe – including this weekend – are adding to the disruption.

Speaking at the ACI Europe annual congress in Rome, Jankovec said airports had taken measures to improve the situation, which would come into effect from mid-July.

“Additional staff will be coming in July, the reconfiguration of some of the facilities and infrastructure to facilitate the flows will also come into effect in July,” he said.

READ ALSO: Airport chaos in Europe: What are your rights if flights are delayed or cancelled?

“But I think that in the vast majority of airports, the traffic will go, people will not miss their planes, and hopefully everybody will be able to reach their destination as planned.”

He also defended increases in airport charges, after criticism from the International Air Transport Association (IATA), which represents airlines.

Airports face “the same difficulties and inflationary pressures” as airlines, which he noted were putting their fares up, he said.

“Staff and energy is 45 percent of our operating costs, and of course inflation is also driving up the cost of materials,” he said.