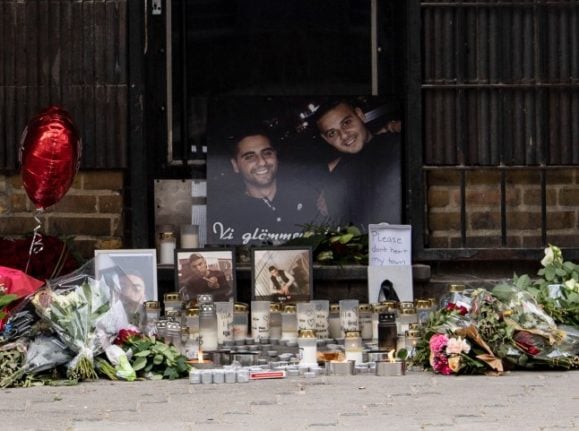 A memorial lain outside the Galaxy Cyber cafe in Malmö in 2018 after three men were shot dead inside. Photo: Johan Nilsson/TT

“We need get hold of things and cash for this war,” two men wrote to another on the encrypted chat service as they planned a series of murders in the spring of 2020.

Swedish police were able to follow gang members’ plans to carry out five separate lethal shootings in real-time, making them unwitting participants in one of the biggest coordinated European police operations in history.

Police waited until the last minute before stepping in to prevent the five killings happening, and monitoring the chats has thrown light on nine murders that did take place, and one kidnapping.

On Monday,  a court case will begin in Malmö against the fifteen criminals charged for their roles in what they themselves described as a war to control the drug trade across the whole of Skåne in southern Sweden.

In the chat, the men discussed potential hitmen to contact, how much a hitman would cost, and which getaway car should be used.

According to Michael Hansson, a prosecutor with the Swedish police’s international and organised crime unit, police were at points able to follow preparations in real-time.

“In our case, I felt that was what we could do from the middle of May last year,” he told TT. “We would probably have had a murder here instead, if we hadn’t had access to the Encrochat material in real time,” he said.

He estimates that a total of five murders would probably have happened if police had not been able to read gang members’ communications, and then, from the end of the summer last year, begin to arrest some of the suspected participants.

The full trial begins on Monday, and although the 15 men were not in the same gang, they are accused of banding together in a temporary alliance to wage a “war” against a 24-year-old man who is one of Malmö’s most notorious criminals, and the circle around him.

“They say themselves in some situations that this is an alliance,”  Hansson said, adding that the goal had been to take over the drug trade in Skåne.

READ ALSO: ‘One of the most extensive strikes ever’: 155 Swedish arrests in global police sting

Nine murders have been connected to the same conflict, including the high-profile shooting of the 31-year-old doctor Karolin Hakim in August 2019, and the triple murder inside an internet café in the summer of 2018.

In the latter case, police believe the 24-year-old, who was injured in the shooting, had been the true target.

Two years later, the man was arrested in Dubai and extradited to Spain, where he is suspected of another murder.

The investigation document in the case extends to up to 30,000 pages, and the trial is scheduled to take 48 days in court.

One of the biggest challenges for the prosecution will be to prove that the accused are indeed the people behind Encrochat profiles such as kitekiller and knarklangaren.

“It’s the small details that we’re looking,” Hansson told TT. “Someone talks of getting a pair of dogs of a certain race, and then we go to the person’s parents’ house and find two dogs of the exact same race. Someone says that they became a dad the day before, and we can check and see that he did become a dad the day before.”

According to the Swedish police’s nation unit NOA, the cracking of EncroChat has led to 200 people being suspected of crimes in Sweden, with several cases leading to convictions.

The EncroChat case have faced legal obstacles in Sweden, however, with defence lawyers raising issues over how the cracked material has been obtained and handled.

“There’s nothing strange about that at all,” Hansson said. “This is surveillance information we’ve received from France and how the French obtained the material is confidential, so we don’t know [how they did it]. But in Sweden, you are free to provide any evidence you want, and then it’s up to the court to weigh up what it should do with it.”