Street names and auditoriums at the Karolinska Institute will now be renamed. Photo: Tomas Oneborg/SvD/TT

The Retzius Laboratory, Retzius auditorium, and Retzius väg – a street running through the KI campus in the town of Solna, near Stockholm, will now be renamed.

The auditoriums and streets in question were named after father and son Anders and Gustaf Retzius, active in the 19th century. They were both researchers within the field of eugenics, with son Gustaf Retzius considered one of the fathers of “scientific racism”, a pseudoscientific theory trying to glorify the “Nordic race” as the “highest race”.

His father Anders Retzius is best known for the “cephalic index”, a measure of skull proportions that is a source of racist hierarchies. He claimed people with “elongated” skulls were superior to those with “short” ones. These theories, for which the institute houses a large collection of skulls, later fed into the “racial hygiene” promoted by the Nazis.

“They espoused values that are not in concordance with the core values that we as a university should adhere to,” Ottersen said in an online video.

Von Eulers väg, another street in Solna, will also be renamed to Ulf von Eulers väg. This is to make clear that the street is dedicated to Ulf von Euler, 1970 Nobel Prize winner in chemistry who was active at KI, and not his father Hans von Euler, a 1929 Nobel Prize winner in chemistry who was an active member of a Swedish-German organisation that became pro-Nazi.

The decision follows heated debate between students and faculty, with students calling for busts, street names and room names dedicated to “racial researchers” to be removed.

The institute will also appoint a committee to further develop a set of principles for naming buildings, lecture halls and other rooms at KI, according to a press release.

All students at KI will also be offered lectures on KI’s background and history, including the aspects of its history which are now considered controversial.

“I think it’s important that KI find a balance between our history and the values which are central to our organisation today. I want to create opportunities for a lively, critical and ongoing discussion about what created KI and what we do today which will be criticised by future generations,” said Ottersen. 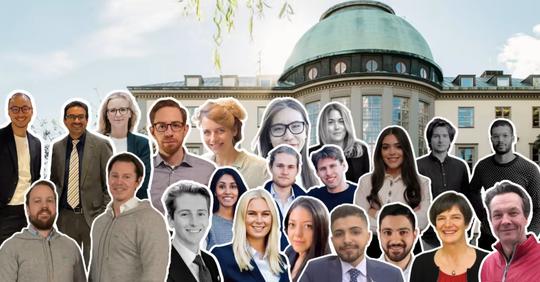 PARTNER CONTENT
‘This MBA landed me my dream role’ – the secret to accelerating your Swedish career
Url copied to clipboard!