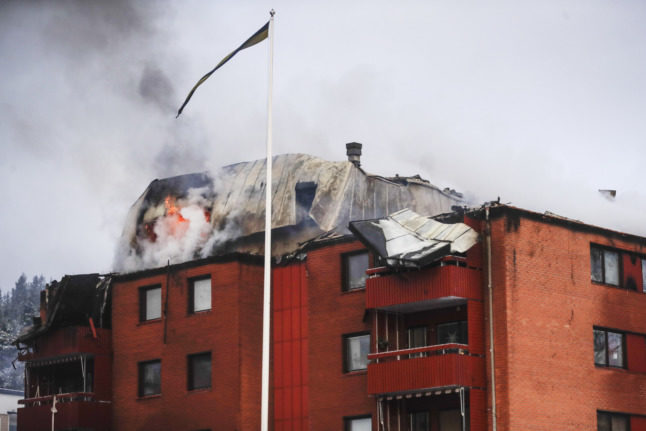 Police confirmed that one person died in the fire in Ånge, in the Västernorrland region. Photo: Mats Andersson/TT

The alarm was raised at 08.41 on Friday morning, with images from the crime scene showing smoke pouring from the building, with sections of the roof in flames.

Fire services described the fire as a “serious incident”, but said on Friday afternoon that they had it under control.

“We now have control of the fire so much so that we know it is not going to spread to other buildings, but it’s not yet been put out. Work to extinguish the fire will continue throughout the day,” Lars Hammarström, local fire service chief, told the TT news agency.

A nearby building was evacuated due to smoke entering the building.

“We’re working on removing the smoke now so that they will be able to move in there this evening,” Hammarström continued.

In a press statement earlier on Friday, the Västernorrland region stated that “between ten and twenty patients were or are in need of care and are being looked after,” with the majority suffering from minor injuries.

The municipality has opened a crisis centre for those affected, with medical personnel, clothes, and other help on offer. Municipality chief Mattias Robertssn Bly stated that the municipality have “ensured that we can provide housing for everyone, both in the short- and long-term, as no one will be able to live in the building for a long time”.

It is unclear as to what caused the fire, with Ånge police chief Marcus Ceder stating that it is “too early to say whether the fire was started deliberately”. Ånge is a town of around 3,000 residents, some 400 kilometres north of Stockholm. Photo: Google Maps