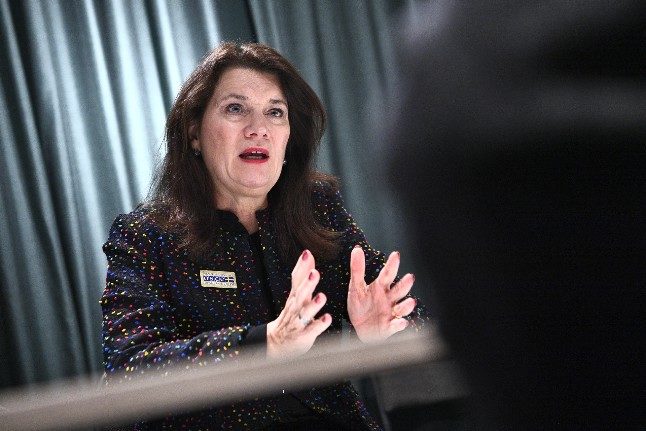 In a press release announcing the visit, Sweden’s foreign ministry said that Linde would “discuss Russia’s actions and the situation in and around Ukraine”, with, among others, Wendy Sherman, Deputy Secretary of State, Jonathan Finer, President Joe Biden’s national security advisor, and Uzra Zeya, the Under Secretary of State for Civilian Security, Democracy, and Human Rights of the United States.

“The USA is a very important partner, and our close cooperation, both bilaterally and through the EU is necessary both to underpin the European security order and stability in our neighbouring region, to fight the retreat of democracy worldwide, and to drive important values issues in international forums,” she said.

Russia alarmed Sweden and its neighbour Finland when it published a mock-up treaty with the US in December, which included a list of desired security guarantees which included a commitment to “prevent further eastward expansion” of Nato, something which would bar the two non-aligned countries from joining the alliance.

Sweden’s defence minister, Peter Hultqvist, said before Christmas that this request was a “totally unacceptable” infringement of Sweden’s options.

“We must have the freedom to take our decisions based on what we believe is best for the Swedish people. It is about our basic sovereignty and freedom of action to make our own decisions,” he said.

But he faced criticism from centre-right parties – which unlike the ruling Social Democrats support Nato membership – for adding that Sweden “will not join Nato, either now or later”.

Finland, which like Sweden is not a Nato member, pushed back more assertively against the Russian move, with both the country’s president Sauli Niinistö and its prime minister, Sanna Marin, using their New Year addresses to assert the country’s “Nato option”.

Magnus Christiansson, a senior lecturer at the Swedish Defence University, said Linde would use her visit to communicate Sweden’s position ahead of Wednesday’s Nato-Russia Council meeting, and would also want to send a signal that Sweden is free to choose its own alliances.

“Sweden does not have Nato access, so she would be rather desperate to give Sweden’s perspective ahead of this summit, and she would also want to show the world that Sweden is on the Western side,” he said.

As well as coordinating with the US ahead of the summit, Linde’s visit might also include discussions on how Sweden and Nato will coordinate in the event of a Russian invasion of Ukraine.

Russia’s demands, he argued, were so far-reaching that they might be less a negotiating tactic than an attempt to build a ‘casus belli’ or justification for war.

“It might be that the Swedish government realises this and then her trip and her discussions and preparations for the Nato meeting would be preparations for defence: how do we coordinate in the case that this there is a spillover into the Baltic states? Christiansson said. “It might be part of this crisis management.”

In the press release, Sweden’s foreign ministry said that the meeting was following up the visit to Stockholm from US Secretary of State Antony Blinken at the start of December, indicating that Linde’s trip may have been planned before Russia made its demands.

Earlier this month, the Senate voted 95-1 in favor of the Nordic states’ accession, making the United States the 23rd of the 30 NATO countries to give formal endorsement. Unanimous support is needed for new membership.

Biden, who has made restoring traditional US alliances a cornerstone of his administration after Donald Trump’s move to upend ties around the world,
praised NATO as “the foundation of American security.”

President Vladimir Putin’s Russia “shattered peace and security in Europe” by invading Ukraine, Biden said. “Putin thought he could break us apart…. Instead, he is getting exactly what he did not want.”

The White House said that ahead of the signing ceremony, Biden talked by telephone with Swedish Prime Minister Magdalena Andersson and Finland’s
President Sauli Niinisto.

“President Biden congratulated them on the US Senate’s swift, bipartisan ratification of their NATO accession protocols, and welcomed Finland and Sweden moving one step closer to becoming NATO Allies,” the White House said.

While the process plays out, “President Biden affirmed that the United States will work with Finland and Sweden to remain vigilant against any threats to our shared security, and to deter and confront aggression or threat of aggression,” the statement said.